You are currently viewing all posts tagged with bicycle.

The effect is evident when looking at the Amazon price history graphs provided by CamelCamelCamel. For example, take the six-month price history of my preferred chain: 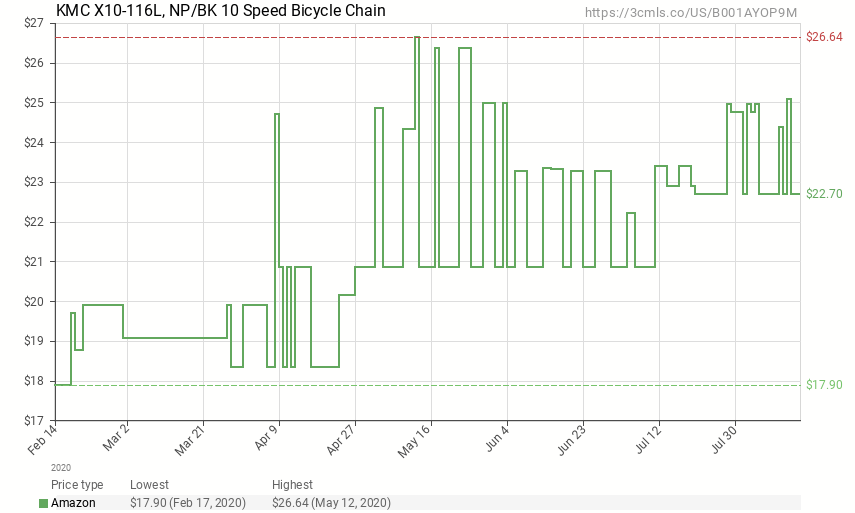 Or the six-month price history of my favorite tires:

Fortunately, I have a long-held policy of stocking spares.

The previously mentioned Orfos Pro LED flares ship with Velcro One-Wrap for mounting. This works well enough, but lately I’ve decided I prefer using shock cord and cord locks. The cordlocks add a little weight to the system, but this setup mounts to all the things I want to mount the lights to, and makes it very easy to tighten. After tightening the lights don’t move around at all, where with the Velcro they would move a little on a bumpy road. This system is also quick to attach and detach, which I appreciate when parking, and can be more easily manipulated when wearing full-fingered gloves. 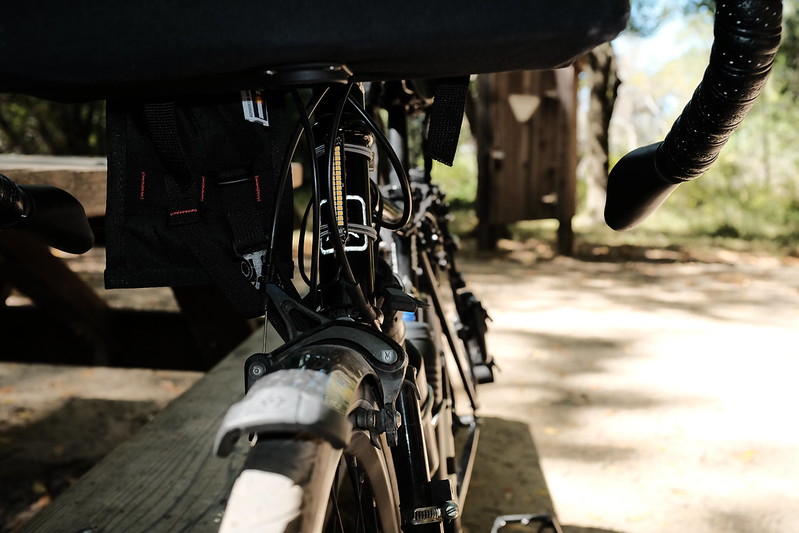 Chain elongation may be measured with a ruler – 12 complete links on a chain should measure exactly 12 inches – but performing this measurement with accuracy and precision, and identifying when the measurement is off by 0.50% or 0.75% can be difficult. Hence the market for chain measurement tools.

In the past I have used a Park Tool CC-3.2 and a Park Tool CC-2. The CC-3.2 was a simple go-or-no-go measurement tool which attempts to identify when the chain has reached the 0.50% or 0.75% limits. The gauge of the CC-2 provides a more detailed look, attempting to show you not just if the chain has reached the replacement point but also how closely you are approaching it. Both of these tools share the same weakness: they measure from opposing roller faces, meaning that when the tool is inserted into the chain it is applying pressure in opposite directions. This behaviour incorporates inconsistencies of the roller diameter into the measurement, rather than just measuring the pin-to-pin distance, which can result in the tool providing a premature indication of the chain’s wear. 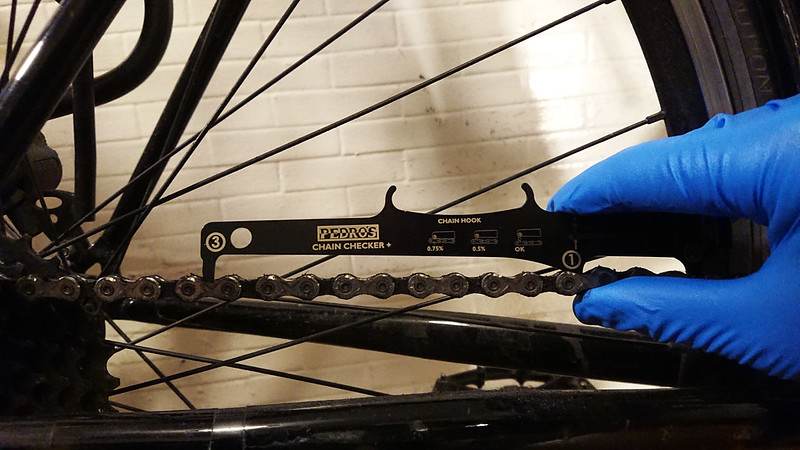 Recently I purchased the Pedro’s Chain Checker Plus II. This is one of a newer generation of tools which attempts to eliminate the previous inaccuracy by measuring from the same side of the roller. The tool applies the load to the chain in the same direction during measurement, rather than pulling in opposite directions. This simulates how the cog experiences the chain when the bike is pedaled and allows the tool to more accurately gauge the pin-to-pin distance. Compared to an older style tool like the Park CC-3.2 or CC-2, it should tell you to replace the chain later. Getting more life out of the chain (without potentially damaging the other components of the drivetrain) is useful not only for your wallet, but also to reduce waste. A Duke University study claims that the manufacturing of a chain is one of the more wasteful parts of bicycle production.

The Park Tool CC-4 should provide the same measurement as the Pedro’s Chain Checker Plus II. I went with Pedro’s option because it also provides a chainring nut wrench (useful when tightening or replacing chainrings) and a chain hook tool (theoretically useful when installing or removing chains with master links, though I’ve never found a tool necessary for this).

I learned about these newer tools thanks to Dave Rome’s excellent article on CyclingTips, which includes many more details on chain wear and measurement.

ROK Straps are superior bungie cords. They are designed to be safe and long lasting during prolonged outdoor use. Each end of the strap consists of a sewn loop, allowing it to be securely fastened to a wide variety of frameworks without concern for scratching or marring the surface, or for a hook coming released under tension and finding its way into an eyeball. Cargo secured by the ROK Strap is easily accessed via the side-release buckle. Most of the ROK Strap is simple webbing, adjustable thanks to the buckle. One side of the ROK Strap has a short segment of a durable natural rubber, giving the strap some elasticity, but not enough that unintended recoil will likely result in the strap finding its way into an eyeball. The rubber is contained in a polyester braid for UV protection and additional durability. 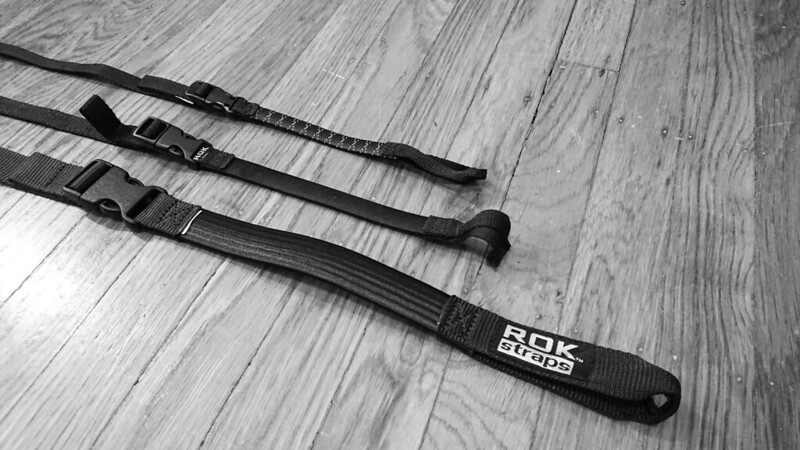 For securing cargo to a bike rack, my preferred model is the Pack Strap. These expand from 12” to 42” inches. They are 5/8” wide and are rated to carry up to 55 lbs. I find this is the right size for most cargo and have used it to transport: sleeping pads, folding chairs, toilet paper restocks, a year’s supply of paper towels, pizza, and takeout yakisoba.

The smallest model is the Commuter Strap. These expand from 12” up to 28”. They are 1/2” wide and are rated to carry up to 40 lbs. If you just want to lash down a jacket or sleeping bag, these may be appropriate. They are long enough to secure common small cargo on a bike, but I would always rather have the extra range of the Pack Strap for handling awkward loads.

ROK Straps are also available in the ATV Strap model. These expand from 18” to 60”. They are 1” wide and are rated to carry up to 100 lbs. Apparently these are popular among people who ride motor-scooters. The 18” minimum length is too large for some of what I want to attach to a bike, and I’m not keen to carry cargo that would require the 60” maximum length. I saw a photo once of somebody who used these to attach a 45 gallon trash can to the back of his scooter. If that’s what you need to do, I guess consider these, but for what I find myself carrying I don’t need the extra length or weight rating of these over the 42” Pack Strap. This model stays at home in my bag of miscellaneous bondage.

The above measurements are of the ROK Straps when the rubber is at rest. When under load, all three models can stretch about an additional 4”.

The loose ends of the ROK Straps can be secured using either VELCRO One-Wrap or ITW Web Dominators. 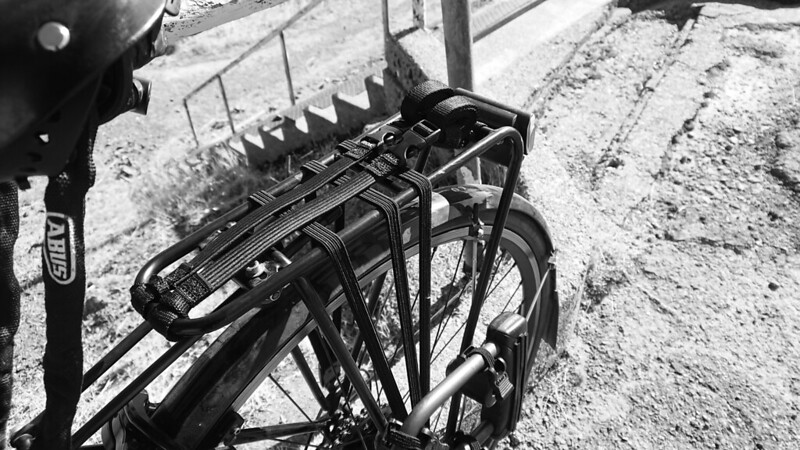 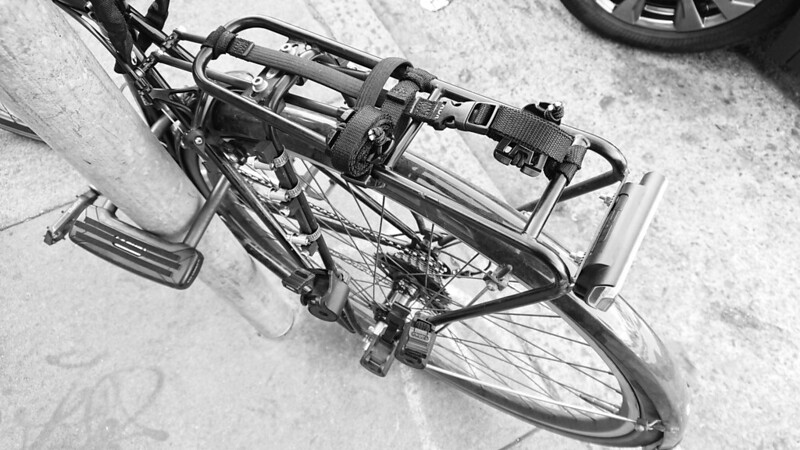 In 2014 I identified the ASP Defender series as the best pepper spray for my needs. I stand by this today, except that originally my preference was for the 4.5” Palm Defender. Over the years my preference has migrated to the 5.75” Key Defender. The Key Defender is in my pocket every day.

While I prefer pocket-carry for everyday, I’ve often thought about something that would allow for quicker access – especially on the bike. I’ve looked at a number of solutions for mounting a capsicum delivery mechanism to a bike, but never found one I liked. Instead, I ended up purchasing a second ASP Key Defender and mounting it to the shoulder strap of my backpack, which I wear frequently when in the saddle. 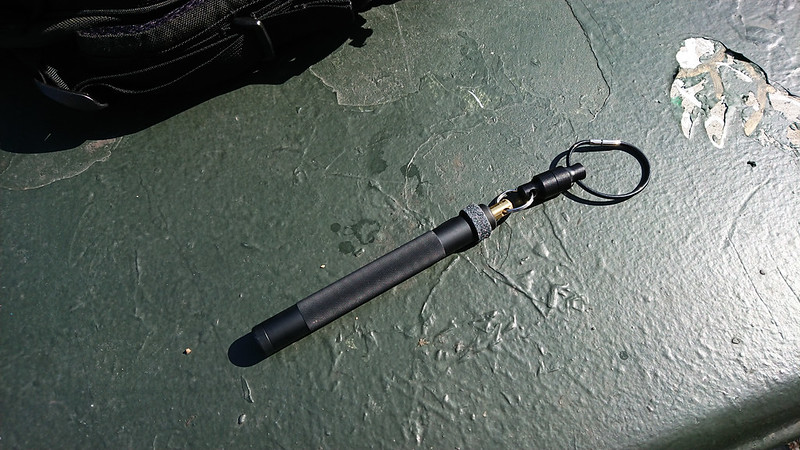 The Soft Loop holds the Defender tight enough against the strap that it doesn’t spin around during daily carry. When mounting the Defender, I orientate it so that safety clasp (which I still cover with grip tape) is against the shoulder strap. This eliminates any chance of the safety somehow accidentally becoming released and the trigger actuating. It also keeps the safety in a known, consistent position when the Defender is drawn. 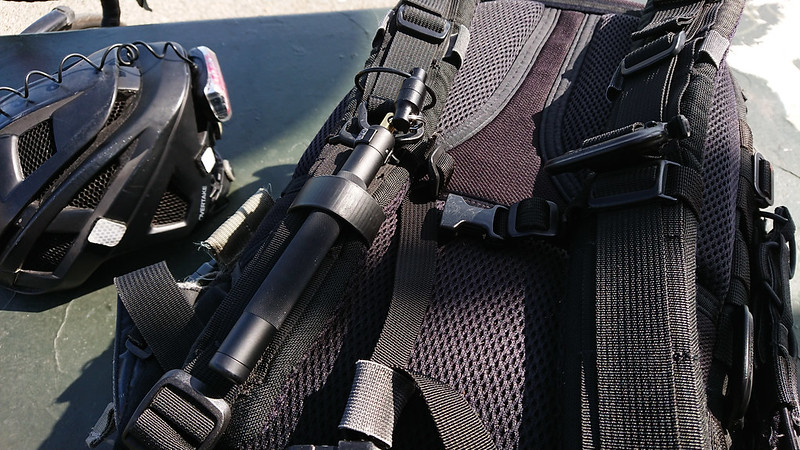 Enough of the shaft of the Defender is left below the Soft Loop that it can be easily gripped. It is deployed by simply ripping downward. The magnetic clasp breaks away and the top of the device slides through the Soft Loop. This is very quick and very easy to do, with either hand, even when wearing gloves.

Another neat benefit to the magnetic clasp is that it allows you to easily reattach the Defender, if you decide you quickly want both hands free. The magnet is strong enough that it will connect if you simply wave the top of the Defender within a couple inches of the half of the clasp still attached to the shoulder strap. This can be done without looking. Of course, the Defender will swing around as you move until you shove it back underneath the Soft Loop – a procedure which does take two hands and at least one eye. 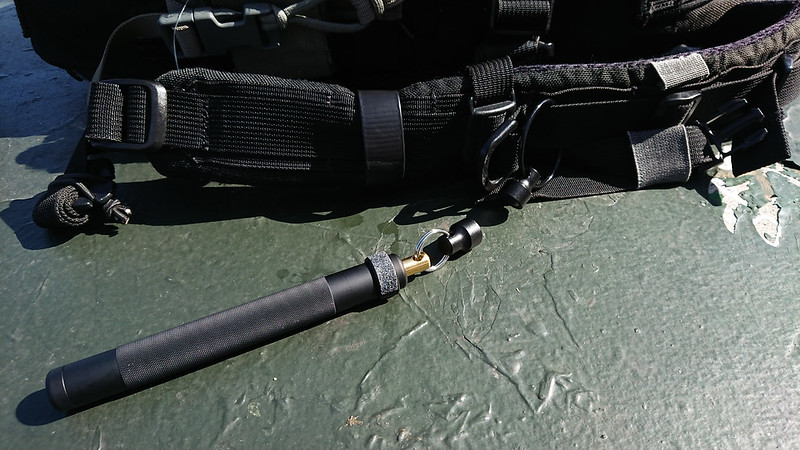 I’m happy with this setup as a supplement to the OC carried in my pocket. It can move easily to different backpacks. It could probably be made to work with any pepper spray intended to be attached to a keychain, though it works especially well with the ASP Defender series thanks to the hammer grip used to deploy them.

Ten year ago I discussed the humangear capCAP. My conclusion was: the capitalization of the brand and product name is stupid, the cap itself is a good upgrade to any wide mouth (63mm) bottle, but it will allow a few drops to leak out of a wide mouth Klean Kanteen.

Recently I was made aware of a new model: the humangear capCAP+. This one adds silicone gaskets to both parts of the lid, and boasts compatibility with a wider range of bottles. However, humangear explicitly states that this one remains incompatible with the wide mouth Klean Kanteen.

I like to live dangerously, so I bought the new model anyway. For a couple weeks now I’ve been using it on the same Klean Kanteen Wide 27oz bottle used in the previous review. Despite humangear’s warning, I have had nary a drop leak out from the cap. I have tried to make the lid leak by filling the bottle and storing it on its side, and by balancing the bottle upside down on the cap, but no water has escaped. 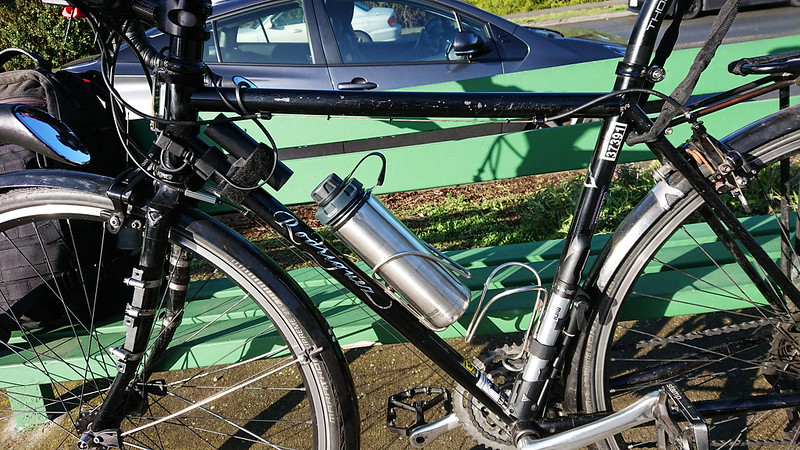 Other changes in the new model include redesigned grip cutouts, which I find to have made no practical change to the functionality of the cap, and a cap retention thing that I thought would be kind of a gimmick but is actually surprisingly useful. (I will point out that the full name of this feature is the “humangear capCAP+ CapKeeper”. Someone at this brand hates English.) 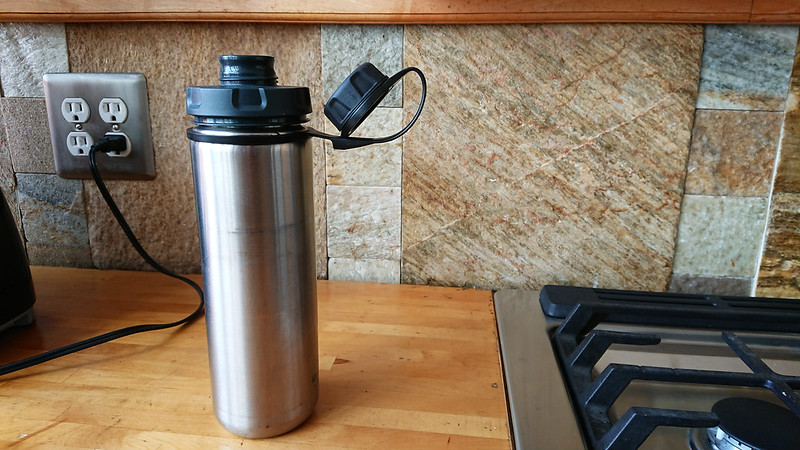 I’m happy with the capCAP+. If you have the original capCAP, and it doesn’t leak on your bottle of choice, it probably is not worth upgrading. If it does leak, consider trying the new one. If you have neither model, but you use a wide mouth bottle and rely on something like the Guyot Designs Splashguard, the capCAP+ may improve your life.

The same spray bottle of isopropyl alcohol used to clean my human interface devices is also used to clean the brake pads and braking surface on my bike. 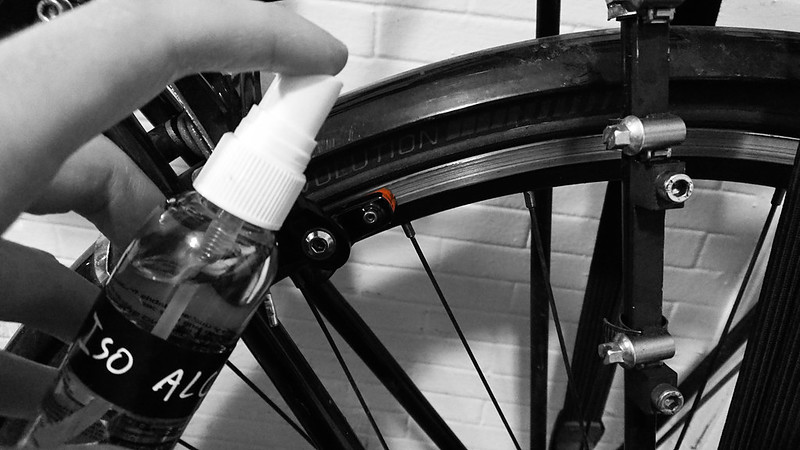 Soap, degreasers, and similar cleaners are best avoided on these components. They can leave residue that decrease braking performance and causes squealing (thus diminishing the all important bike ninja factor). Spraying the brake pad with isopropyl alcohol and wiping it off with a clean rag is usually all that’s needed. Sometimes I’ll hit the pads with a Scotch-Brite Scour Pad after spraying them.