I build my own patch kits, consisting of a small re-sealable bag which holds: 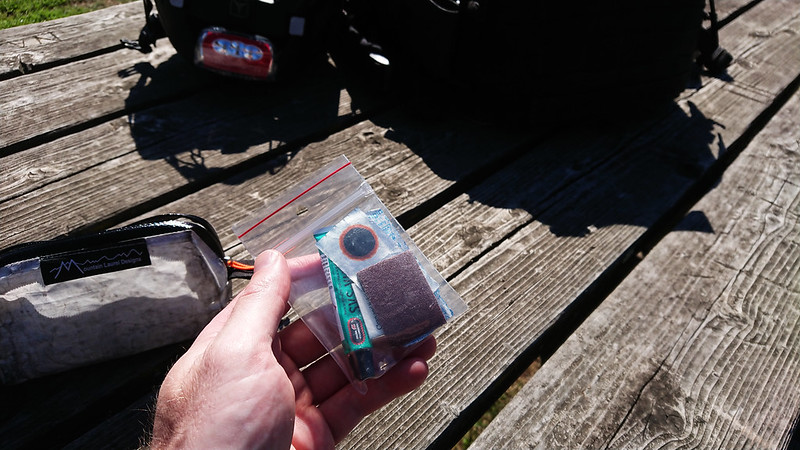 This is stored in my EDC toolkit which, as previously mentioned also includes two reifenflicken and tire levers. Because these patch kits are so small, I also keep one in the tube roll underneath my saddle.

Rema has been making vulcanizing patches for about a century. They have a long held reputation for being one of the best. I haven’t experimented with much of their competition, but I’ve never had a Rema patch fail, and as a general rule when it comes to bicycle parts and components I find that if the Germans do a thing they probably do it at least as good as anybody else, if not better. So I buy their patches in bulk and I keep an 8 oz can of their fluid for use at home.

A quality vulcanizing patch is a permanent repair. If applied properly, it will leave the tube as good as new. In contrast, “glueless” or “pre-glued” patches have a reputation for being unreliable, temporary fixes. I’ve had good luck with Park Tool’s pre-glued patches from the GP-2 kit, but I still consider them a temporary solution.

The advantage of a pre-glued patch is that it is a nearly instant repair: buff the area with sandpaper, slap on the patch, rub it a bit with your fingers or roll it over your top tube or pump, and you’re ready to go. Patching with a permanent, vulcanizing patch is a longer procedure: buff the area with sandpaper, apply the vulcanizing fluid, wait around 3 minutes for the fluid to become dry and tacky, slap on the patch, rub it in, and then you’re rolling. (Some would argue that you shouldn’t inflate the tube immediately after patching, but I’ve never had a problem doing this. The key is allowing the vulcanizing fluid to sit for enough time prior to applying the patch.) In unpleasant weather, or when you have some place to be, the extra three minutes (or thereabouts) required is unattractive.

Carrying both types of patches, plus a spare tube, provides options. If I get a flat, and it’s a nice day out, and I don’t have any place to be, and I’m in a pleasant area, I’ll fix it with a vulcanizing patch. If conditions are not so idyllic, I’ll quickly swap out the tube and continue on my way. When I get to where I’m going, I’ll patch the punctured tube with a vulcanizing patch, reinstall the newly patched tube and put the new tube away. If I get a second flat before I can fix the tube that was originally punctured, I’ll slap on one of the pre-glued patches until I get to my destination. Then I’ll repair the first tube with a vulcanizing patch, and throw away the tube with the pre-glued patch as soon as I can acquire another spare.

I’ve also successfully used a Park Tool pre-glued patch to repair a leaky Therm-a-Rest mattress. It’s useful to know I can fix a mattress during a multi-day bike trip without needing to remember to pack an additional item.

Of course the best strategy is to not get a flat in the first place. As I am fond of pointing out, I buy good tires, which prevent me from getting a flat more than once or twice per year. A good tube costs around $10, but with proper care and feeding ought to have a service life measured in years.