Fix It Sticks are 1/4” magnetic bit drivers, originally intended as bicycle repair tools. Each stick holds two bits, and can be used individually or connected together in a “T” when more torque is wanted. 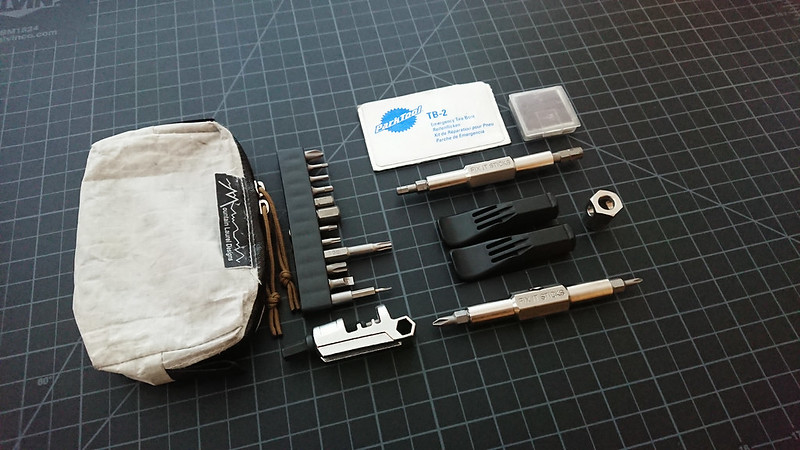 The sticks, bits, chain breaker, and tire levers – along with a patch kit and my Pitlock key – are stored in a small Mountain Laurel Designs Cuben Fiber Packing Cube. This lives in the admin pocket of my FAST Pack Litespeed, but also slides easily into a pocket if I’m riding bag-less. I also keep the new Fix It Sticks Magnetic Patch on my Litespeed. If I switch bits while fixing my bike on the side of the road, I can just toss a bit at my pack and the patch catches it. 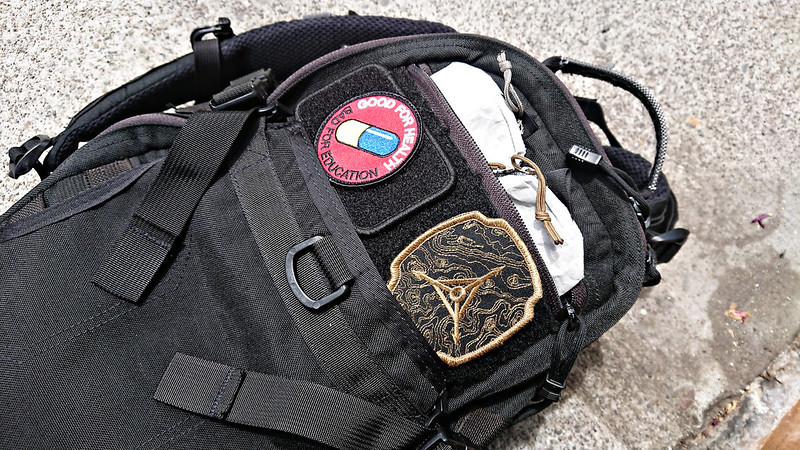 At home I have an excessive collection of 1/4” bits, including things like socket adapters, extensions, and the Fix It Sticks Glock kit. What’s most attractive about the bit and driver system to me is that these 80-some bits take up a miniscule fraction of the space that I would otherwise need for the tools. I keep a Wera Kraftofmr 816 RA driver at home for those times when I want something that ratchets, but the Fix It Sticks are what I pull out the vast majority of the time.

At work I keep some additional bits, along with a few other tools, in a GPP1. Some of these duplicate my EDC bits, but most of them are things that are not common enough to warrant carrying, but common enough that I like to have them around. 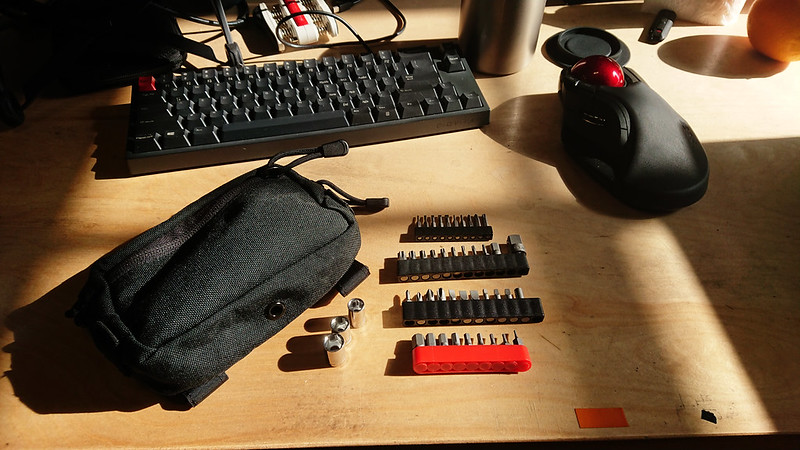 The bits I EDC are fairly standard. 4mm and 5mm hex bolts live in one stick. Those two attack the majority of bolts on my bike. A Phillips #0 and #1 live in the other stick. Those two are most useful for general screwing. In the bracket, I keep:

Carrying the “security” Torx instead of the standard Torx allows me to tamper with tamper-resistant electronics, which is a useful capability to have. They drive normal Torx bits screws just fine, which accounts for the majority of their use. The T25 is a longer (50mm) bit. I use this one as leverage when operating my Pitlocks.

The 1/4” to 4mm adapter allows me to run any 4mm micro bit in the Fix It Sticks. Part of the collection of bits in my GPP1 at work are micro bits that I use to attack electronics (at home I have the iFixit 64-bit Kit, which is a great hardware hacking kit for the price). A slotted 1.5mm bit is the right answer for most eyewear, which is why I carry that bit in the adapter every day.

On my scale, a single titanium stick without bits weighs in at 28 grams. Both sticks, with the 4 bits that I keep in them, tip the scale at 74 grams. When I add the bracket with 12 additional bits, the total weight is 148 grams. Adding the chain tool and two tire lever attachments to that, the whole kit is 228 grams, or 8 ounces. That’s pretty reasonable for all the capability those items offer.