When I purchased my first smart phone in 2013, I was motivated primarily by the promise of using Open Street Map for bicycle navigation. This does not require, but is greatly assisted by, a mounting system of some sort. I’ve tried a few over the years. Since 2015 I’ve used the Aduro U-Grip Plus Universal Bike Mount, which I think is an excellent design. It uses a ball and socket to provide complete adjustability. It secures the phone with a spring-loaded cradle and silicon band. Between the two, there’s no way the phone is falling out, unless the mount breaks. Unfortunately the whole thing is cheaply made of plastic. Earlier this month, mine finally broke.

After seven years, I feel I got my money’s worth out of the Aduro U-Grip, but when a tool like this fails I want to replace it with something better. Purchasing another of the same just resets the countdown to the next failure. Unfortunately, the bicycle phone mount market seems to be flooded with shit. Either they provide limited adjustability, or they require a special phone case. I have no interest in either. I was disappointed, and about to just order another Aduro U-Grip, until I happened upon Tackform. Their Enduro Mount was advertised for motorcycles, but I figured it ought to work on a real bike. 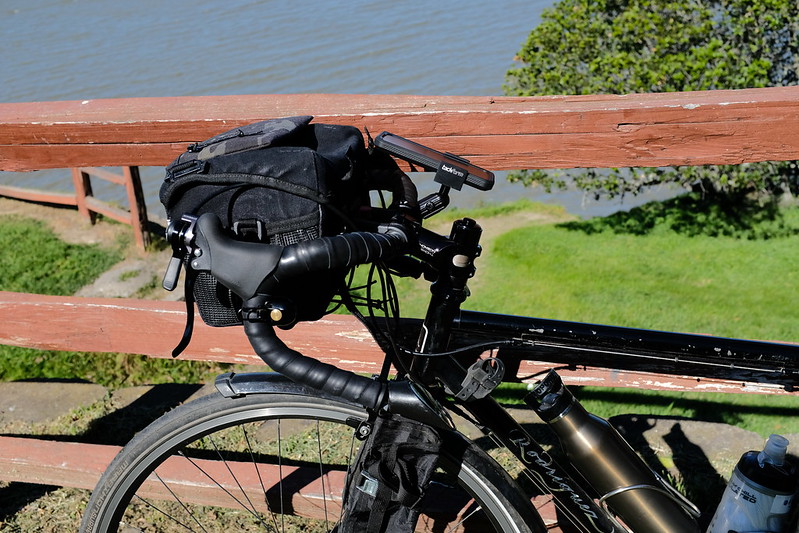 Tackform’s offering is similar in concept to Aduro’s, with a ball and socket providing complete adjustability, and phone security provided by a spring-loaded cradle and silicon band. But it raises durability to the extreme. I’ve had mine for just a few days. I am impressed.

The only plastic component is the wingnut used to lock the position of the cradle. Everything else is metal. The spring that operates the cradle is no joke. It is capable of operating as an improvised finger guillotine. Yet it is quick and easy to operate one-handed. Tackform includes a silicon band for further security, but in the packaging material they say that you really don’t need it. I believe they are correct. When it is installed in the cradle, I can lift the bike with the phone. The phone doesn’t move at all. It is difficult to imagine a scenario where the phone would escape.

The top of the cradle has a lip to prevent the phone from being pulled out straight up. The sides and bottom of the cradle are lined with a thin rubber to provide some protection to the phone. The outer edges of the cradle are quite sharp, which makes me somewhat nervous about a crash. I have no doubt that the mount would come through, and that the phone would still be secured in it, but my face might not fare so well if it comes into contact with the cradle. But, hey, that’s what eye pro is for.

The primary disadvantage to the Tackform Enduro is that the arm which connects the cradle to the bar mount is tightened with a single wingnut. To rotate the cradle from portrait to landscape mode, you have to loosen this wingnut, which also loosens the connection to the bar mount. So while the ball and socket connection gives you complete freedom to position the phone as you like, it’s the sort of thing where you need to figure out what position you want and then tighten the wingnut to lock it in. You won’t leave the wingnut loose enough to allow for adjustments while riding. With the Aduro U-Grip, the socket is part of the cradle, the ball is part of the bar mount, and I was always able to leave the nut which secures the two just loose enough that I could make minor in-flight positioning adjustments without compromising the security of the system. In practice, I have yet to find this limitation with the Tackform to be something I really care about. But if you want to be able to rotate between portrait and landscape modes without stopping and using two hands, look elsewhere.

The other disadvantage that some riders will identify is weight. I didn’t weigh the components, but what you’re dealing with here is basically just a chunk of aluminum. I imagine the whole system is somewhere around 6 oz, which is significantly more than the plastic competitors. If you have much spandex in your wardrobe, you won’t be happy with Tackform. But my bike is carefully built for what I see as the ideal compromise between performance and durability, and the Tackform mount makes the cut.

Beyond the durability of the system, what endures me to Tackform is that their products really are systems. They are not just selling a few application-specific packages, but have whole series of components. It’s like a grown-up Lego set. I appreciate knowing that I could replace an individual component, or buy just the piece I need to expand the mount’s applicability to different vehicles or environments.

None of Tackform’s products are cheap, but they claim that their products are designed to last a lifetime. After the first 100 miles on this mount, I believe that statement will prove accurate. I suspect that the slab-format pocket terminal will be phased out and become irrelevant well before the Tackform Enduro will fail. 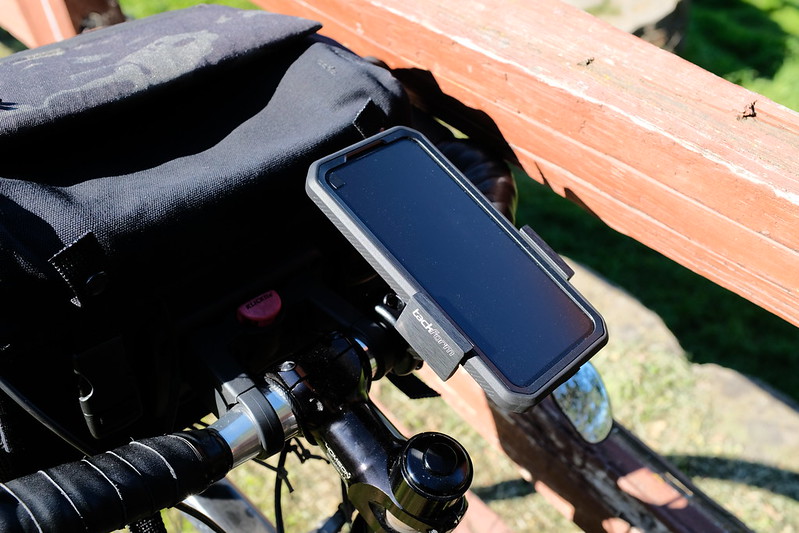 The mount is manufactured in the country of Taiwan, so get yours before China expands its beachfront property.