I’ve worn the Casio Pro Trek PRW-3000-1A for the past 1,746 consecutive days. This is probably the longest I’ve worn any watch that doesn’t say “G-Shock” on it. 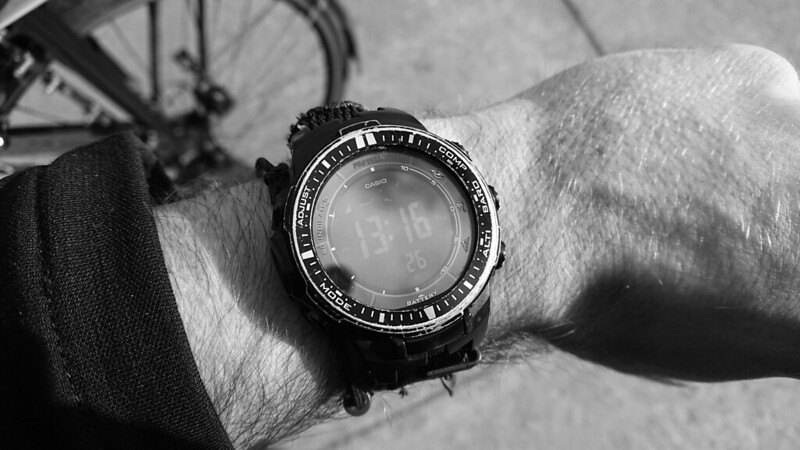 The Pro Trek performs all the basic watch functions you’d expect: it tells time, it provides the current date and day of week, it has a stopwatch, and it has a countdown timer. It supports a second timezone, which I usually keep set to UTC for quick reference but is useful if I’m briefly passing through a different region. It provides sunrise and sunset times for current, past and future dates. These are not exact, but tend to be within 20 minutes of reality, which is close enough for planning purposes. It has four alarms, which I never use.

Beyond those basic functions, the PRW-3000-1A has two characteristics that differentiate it from other timepieces. First, it is both solar and atomic: the battery never needs to be changed, and the time is always accurate. (Eventually, I’m sure, the battery will no longer charge itself, but that doesn’t seem to be imminent.)

The second characteristic is that it is an ABC watch, which means it provides an altimeter, barometer, and compass. Of these three features, the compass is the most useful. It works great for identifying the cardinal directions when you get turned around. It can also store bearings in memory, but using something other than a real compass for actual navigation strikes me as silly. The watch can be configured with declination, but I always leave this off so that the compass points to magnetic north. I apply this strategy to all compasses and GPS receivers, ensuring that they always agree.

The barometer is neat, but not especially useful. I have not found the current atmospheric pressure to be advantageous information. The watch can be told to monitor the barometric pressure over a period, and then alert the user if it sees a rise or fall in pressure, which would indicate a change in weather (very roughly: a rising barometer is good, falling is bad). This is more useful than knowing only the current value, but it only works when altitude remains constant.

The barometer screen also displays a thermometer, but because the watch is worn next to skin I find that this reading is not an accurate representation of ambient air temperature.

The altimeter mode is more useful. The reading is based on barometric pressure. The watch can either convert the barometer readings to altitude based on its stored values from the International Civil Aviation Organization’s International Standard Atmosphere, or it can calculate altitude based on a provided reference value. With the latter option, you tell the watch the current altitude (based on a map reading, survey marker, etc) and the watch then uses changes in pressure to calculate the difference as you ascend or descend. This is how I use the altimeter, and I find the results accurate enough for my purposes (which tend to be “rough navigation”).

The watch features a trip recording mode, where it will periodically record altitude readings and then report back with your maximum altitude, minimum altitude, total ascent, and total descent. I’ve never used this.

I’ve been using the same nylon band that I hacked together 4 years ago. It works great. I repaired it once with my expedition sewing kit.

The watch remains in excellent condition. The bezel is scratched, but that has no practical impact on its function. The face itself has managed to resist all scratching.

The buttons are more exposed than a G-Shock, and they will sometimes activate themselves if I’m doing something like pulling my wrist through a tight cuff. These accidental discharges happen rarely and are only a minor annoyance, but I do wish the Pro Trek was available with the thicker bumper of the G-Shock. (Casio does offer ABC G-Shocks, such as the Rangeman GW9400-1B. I’ve not looked closely at these, but they are probably worthy of consideration.)

Kikuo Ibe’s original G-Shock DW-5000 is the watch against which every other timepiece should be judged. Today I would appreciate the addition of solar atomic functionality, which is available in derivatives such as the G-Shock GWM5610. I purchased the PRW-3000-1A in 2015 for $200, which is a little over twice the common sale price of the G-Shock. I think this has been worth it for the added functionality. Unfortunately the PRW-3000-1A is no longer available. The current equivalent of it seems to be the PRW-3100Y-1. Casio’s list price for this model is $320, which is more than I think the watch is worth. If my watch was lost, I would happily purchase the newer model (or an ABC G-Shock) for $200. If they wanted more than that, I’d likely revert to the solar atomic G-Shock GWM5610 for $80-$100.