I started carrying the Anker PowerLine II 3-in-1 Cable in the latest iteration of my Electronic Support Package a couple years ago. It has a USB Type-A connector on one end, Micro USB on the other, with a USB Type-C and Apple Lightning adapter that pop on to the Micro USB connector. It makes for a nice little multi-cable to charge all my gadgets and transfer small bits of data around.

As I began to acquire more devices that supported USB Type-C, I found that I desired a multi-cable that was Type-C native. A quick survey of the market offered some options, but nothing that struck my fancy. However, during that search I happened to discover that Cozy (the same company that makes those USB Type-A covers I use on my bike lights) offered something they called LightningCozy which would allow me to put together my own multi-cables. So that’s what I did. 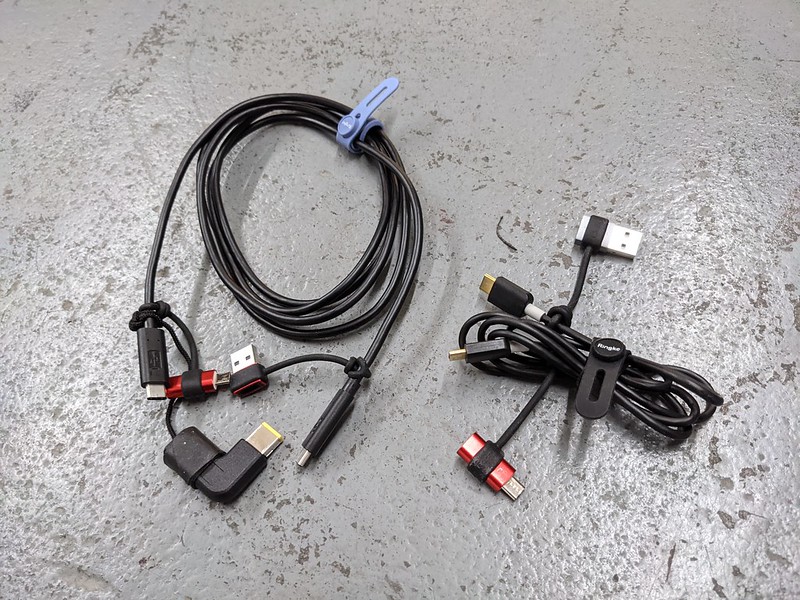 This creates the perfect package for my needs. I can use it to charge all my USB-chargeable things, including the Thinkpad X270. (I have no Apple devices in my life, so I don’t need the Apple Lightning adapter, but could easily add that if I find the need.) The cable doesn’t provide the fastest possible data transfer, but it is more svelte than a fast data cable, and is perfectly acceptable for my incidental data use. It doesn’t do video, but as of yet I have no USB Type-C monitors in my life, so I don’t care. One of these multi-cables is my EDC in the Electronic Support Package.

My second model of multi-cable is built around the Cable Matters USB-C Cable, 100 watt, 6.6 ft. On one end it has a Base Sailor USB C Female to USB Male Adapter attached via a LightningCozy. On the other end it has the same JXMOX adapter as the previous cable, attached via a LightningCozy. It also has a USB-C to Lenovo Slim Tip power adapter I bought a few years ago on AliExpress, attached via electrical tape and a piece of Type 1 Paracord. The cable is bundled with another Ringke Silicon Cable Tie.

I keep this second model in my laptop kit, along with a HyperJuice 66W GaN USB-C Charger. (I also have a Satechi 72W Type-C PD Car Charger I can throw into the kit if I’m going on a trip and think I might be spending a while in a car.) I don’t carry this kit unless I’m also carrying my laptop. This cable allows me to power either of my Thinkpads, or anything else USB-compatible, and gives me more reach than the short EDC cable. Both the X260 and X270 only want 45 watts, so the 100 watt cable is overkill, but it is occasionally useful to have the capacity to deliver more juice to other devices. As with the previous cable, this one doesn’t transfer data at blazing speeds, nor does it do video. I have no need of those capabilities, so I stick with thinner cables.