I carry earplugs everyday. Other people have written about the regular carry of earplugs – usually to aid sleep in foreign environments – but I tend to disagree with the products they choose. Craig Mod recommends the Mack’s Pillow Soft Silicone Earplugs. Tynan recommends the Howard Leight Laser Lite Foam Earplugs. I recommend the SureFire EP3 Sonic Defenders. Each of these are exemplary of a different style of earplug with different intended applications.

The Mack’s Pillow Soft Silicone Earplugs are different from many other earplugs. Rather than being inserted into the ear canal, they seal the conchal bowl. This makes them very comfortable, as there is no internal pressure in the ear, but also makes them less effective at blocking noise. They have a claimed noise reduction rating of 22 decibels. (When dealing with moldable plugs I assume this number applies when you install them perfectly, and that in common usage they’re probably slightly less effective.) I find this style of plug somewhat finicky to install and retain. If you find you cannot stand the feeling of having something in your ear canal, they are probably a good option. For everyone else, you can do better. I will sometimes use these plugs in the axolotl tanks (because water with such a high concentration of salt can be uncomfortable in the ear). In that scenario, I just want to seal my ears from water, but I don’t really care about the noise reduction. These earplugs work well there. If I regularly patronized a public pool I would use them there (because public pool water scares me). The earplugs are intended to be single use. You can reuse them, but the tackiness of the material means it picks up more dirt and is more difficult to clean than other single use earplugs. I haven’t bothered to reuse them.

The Howard Leight Laser Lite Foam Earplugs are a good option for side sleeping. They have a claimed noise reduction rating of 32 decibels. As with the silicone plugs, I assume they probably perform slightly worse than this in common practice due to imperfect installation. When properly installed these earplugs do block a surprising amount of noise, and they remain comfortable. They stick out of my ears somewhat, but because they’re just foam, any extra pressure placed on the outer end doesn’t translate to uncomfortable pressure in my ear canal. While intended to be single use, you can get a few nights of use out of a single pair. Sometimes I’ve woken up to find that one has fallen out, but I figure they’ve still done they’re job as long as I’m waking up naturally and not because of a disruptive noise.

For music events I have the Etymotic ER20XS Earplugs. They have a claimed noise reduction rating of only 20 decibels, but I feel that they do a good job of reducing sounds to safe levels without distorting the quality of the music. They are not appropriate for times when I want to eliminate as much outside noise as possible, which means they are not useful enough to carry everyday. I’ll often forget to grab them when heading out the door to a show. Or I’ll go to an unplanned show straight from some other location and not have the opportunity to pick up the Etymotics from home. (Prior to these I used EarDial Earplugs in this application. I find them both to perform pretty much the same.)

The SureFire EP3 Sonic Defenders have a claimed noise reduction rating of 24 decibels. I do not question this rating. Unlike with the moldable foam or silicone plugs, there’s really no way to improperly install the EP3. 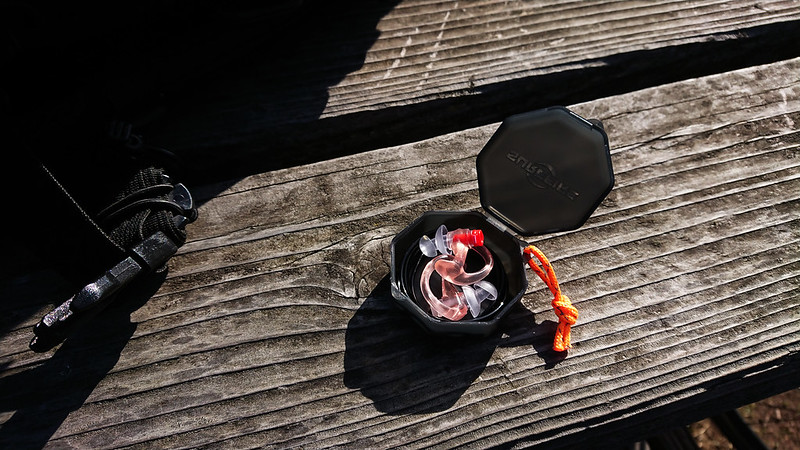 I first got the idea of carrying the EP3 earplugs everyday a few years ago from a local FBI agent. He keeps them in his bag for unplanned gunfights. The unplanned discharging of firearms is pretty low on my priority list, and if I’m planning on discharging firearms or being in an environment where others are discharging firearms around me, my first choice for ear protection will be my Howard Leight Impact Sport Earmuffs with Noiseighter pads. But it got me thinking: if I was already considering carrying a general purpose, disposable earplug like the Howard Leight Laser Lites (which I had previously kept in my EDC first aid kit), why not just pack the EP3s that would otherwise continue to sit in my box of miscellaneous gun stuff at home?

I don’t think they have quite the fidelity of the Etymotics for music, but they certainly reduce the noise to a safe level, while still allowing me to enjoy the music. And with the filters open I can easily tune in to conversations around me, which I think is critical in environments like nightclubs (for both enjoyment and safety).

I find them comfortable enough to sleep in. They sit fairly flush with my ears, and so while they may not be quite as forgiving as Howard Leight foam plugs for side sleeping, I’ve never woken up after rolling onto my side while wearing them.

On their packaging, SureFire does list swimming as one of the activities for which the EP3 may be used. However, I think that earplugs like the Mack’s Pillow Soft Silicone Earplugs that seal the entire ear, rather than just plugging the canal, make more sense if keeping out water is your primary goal. I’ve never found myself unexpectedly underwater, so I’m comfortable not planning my EDC around this eventuality.

The EP3 earplugs have retention rings, which are sized to fit your conchal bowl. (I wear a size medium, which is what SureFire recommends for most adults.) This makes it very unlikely that the EP3 plugs will fall out, which is as useful for sleeping as much as it is for more exciting activities.

SureFire claims a service life for the EP3 of “6+ months”. My last pair lasted 42 months before I replaced them. Granted, I use them infrequently, but it’s safe to say that this style of ear protection lasts significantly longer than disposable-but-reusable earplugs like the Howard Leight Laser Lite and Mack’s Pillow Soft. I store them in the protective case they come in, and wash them with warm soapy water after use.

Earplugs are one of the least frequently used items in what I consider to be my level 2 EDC. If I was seeking to reduce the number of items in my pack, they would be a candidate for elimination. But the reality is that their small size and low weight make them easy to carry in a bag, and when I do need them I am very grateful to have them – whether that is because I’m sleeping elsewhere, enjoying live music, or things are going bang. The SureFire EP3 Sonic Defenders aren’t necessarily the most appropriate ear protection for every environment, but I think they work well in a wide range of applications. Their versatility, coupled with their longevity, is why I choose them over other earplugs.