I purchased an Elzetta ZFL-M60-CS2D flashlight in 2013. Elzetta updated their product line later that year, replacing the Malkoff M60 LED unit with their new AVS heads and creating a new naming convention for their products. In this new line, I believe my ZFL-M60-CS2D is equivalent to the Bravo B313 model.

In 2014 Elzetta released the single cell Alpha model, which offered the same build quality as the larger 2-cell in a more pocket friendly size. I was quick to purchase the Alpha A323, and for the past 5 years it has remained a fairly constant part of my EDC.

There’s plenty of reviews out there focusing on the technical aspects of Elzetta lights – runtime, candela, lumens, etc. I’m not qualified to discuss those aspects, nor do I find them terribly interesting. I’ll just say that I’m happy with the operation of both my lights.

The modularity of the lights requires the user to make some decisions prior to purchasing. I’ve remained happy with the choices I made when ordering the Alpha.

I bought the Alpha with the crenellated bezel ring. Elzetta’s crenellations aren’t sharp and pointy, but they do have deep grooves. They’re intended to be used in a twisting motion, thus tearing flesh rather than just puncturing it. I’ve never been convinced one way or the other as to the efficacy of bezel crenellations on flashlights, but I lean in their favor simply because the downside of having them seems limited.

The primary downside the crenellated bezel does have is that it makes some people nervous. I’ve flown domestically with the Alpha in my carry-on baggage plenty of times over the years and it has never been given any attention. But I know that there is the potential for the bezel to make some poor TSA agent nervous, and that possibility in turn makes me nervous. I haven’t traveled internationally with the Elzetta due to this concern.

The modular nature of Elzetta lights solves this problem. Recently I purchased the standard bezel ring. When I fly I now install the harmless looking standard bezel and keep the crenellated bezel separate in my bag. After going through security the bezels can be quickly swapped and I’m back to normal. If the crenellated bezel ring by itself scares someone and is stolen, I’m only out $15.

I bought the Alpha with the flood lens. The standard lens is more appropriate for long distance, or concentrating a beam of photons in the optical nerve of a ne’er-do-well. But the flood lens is a better solution for my typical flashlight use. I most often use my everyday carry light indoors – lighting up dark rooms, or dark nooks and crannies. Both applications are best solved by the wide, even dispersion of light provided by the flood lens. At these closer ranges – say within 20 feet – the flood lens is definitely bright enough to get a reaction out of anybody it is aimed at. I’m comfortable using it defensively.

I included the standard lens in my recent purchase of the standard bezel ring and forced myself to use it for a while. It confirmed my suspicions about the best lens for me, and I was quick to move back to the flood lens. The modular design once again proves its worth by allowing me to easily switch between the two lenses. 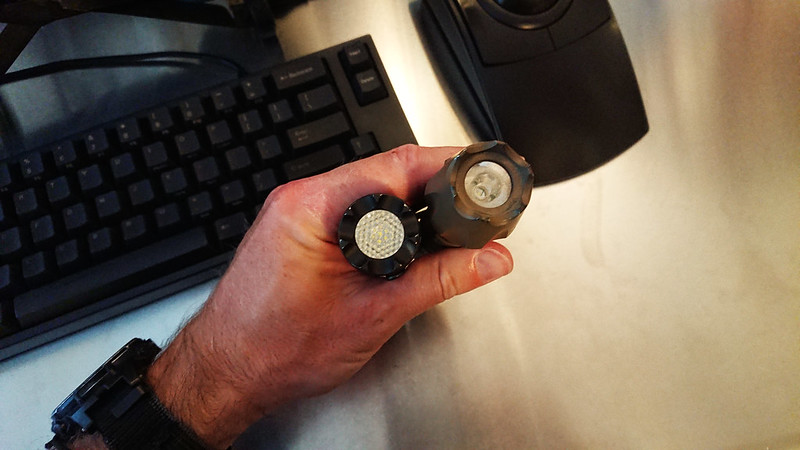 I bought the Alpha with the high-low tailcap. This is the same interface as on my original ZFL-M60, and I wish it was available on all flashlights. I place a high value on the ability to rapidly turn a light on and off, without that action causing the light to cycle through modes. The high-low tailcap allows me to press the button as much as I want at whatever speed I want. There is no click when pressing the tailcap for momentary on. Applying more pressure results in a near silent click and constant on. The difference between the pressure required for momentary and constant on is great enough that I’ve never accidentally turned the light to constant on when trying for momentary on. A slight counter-clockwise twist in the tailcap switches the light from 415 lumens to 15 lumens. This low output mode is great for close and detailed work in a dark environment (especially with the flood lens) where high output causes too much splash to be comfortable.

There are a number of pocket clips compatible with Elzetta lights. Elzetta offers their own Speed Clip, which features the typical hallmarks of Elzetta design: simple, eminently functional, and butt-ugly. I keep the Speed Clip on my ZFL-M60, but I think there are better options for carrying the Alpha.

For the first two years I carried the Alpha on my belt with the Prometheus Lights Titanium Pocket Clip. This clip is cool because it is titanium, and everything titanium is cool. Functionally, it works fine, but there’s nothing special about it beyond the material. 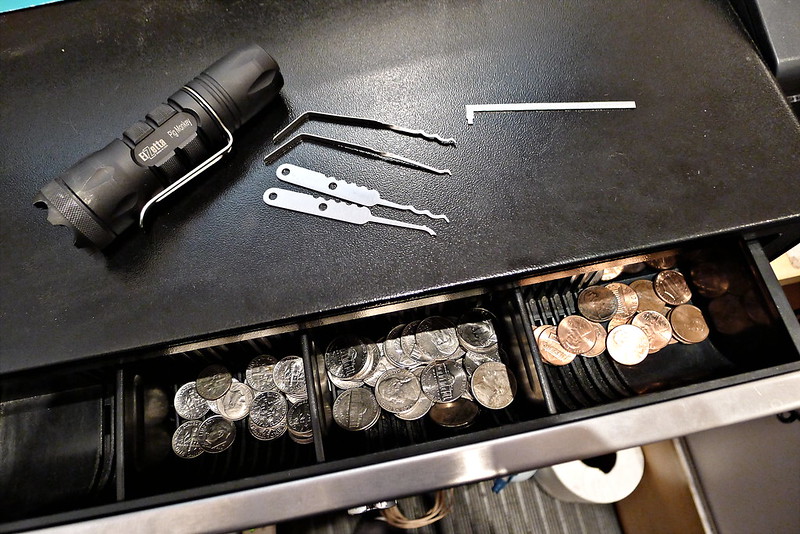 Back in 2016 I switched to the Raven Concealment Systems Pocket Clip. This has remained my preferred solution. The clip itself works great. I’ve used it to carry the Alpha on my belt and in my pocket without any problem. The finger O-ring allows the light to be retained while using both hands for a different task – an ability which is particularly practical and should not be limited to the tactical light market. When not in use the finger O-ring lays flat and can be ignored. I’ve never had it snag or get in the way of anything. 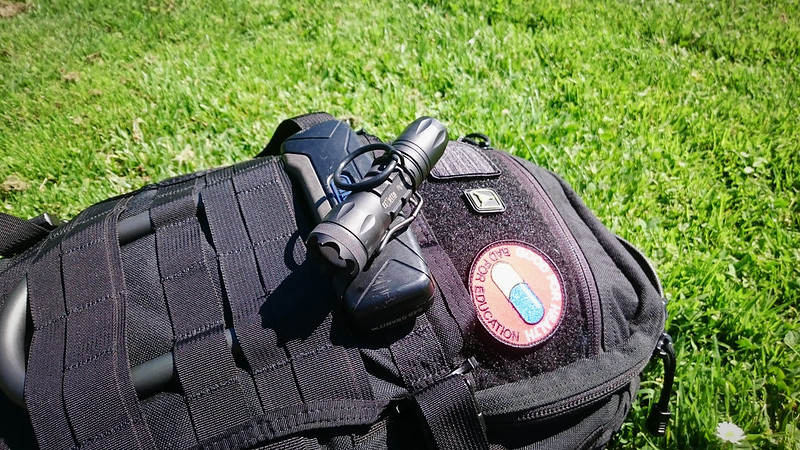 The Thyrm SwitchBack and Thyrm SwitchBack 2.0 both fit on Elzetta lights, but neither are compatible with the high-low tailcap. They prevent the tailcap from being screwed down all the way, which limits the light to only working in low output mode. I suspect both would work fine with the click tailcap, though possible only in momentary mode.

One of the factors that initially contributed to my purchasing the ZFL-M60 was Colion Noir’s review. In it he likened the light to a cockroach, joking that after a nuclear blast the only things left would be cockroaches and Elzetta lights. It doesn’t seem like too much of a stretch.

The durability of Elzetta lights has been established. The electronics are fully potted, making them waterproof. The body is made from 6061-T6 aluminum. The lens is solid acrylic.

People have abused Elzetta lights by throwing them out of helicopters, shooting them with buckshot, and using them to assault a defenseless coconut. My lack of a southern accent disqualifies me from attempting this type of abuse, but I have used mine as a hammer.

The downside of this durability is that the body design of these lights isn’t exactly svelte. The Alpha is on the fatter side of what I’m willing to keep in a pocket, but it is within the acceptable range. In it’s normal configuration, including battery and Raven pocket clip, my Alpha tips the scale at 110 grams (3.9 ounces).

Both of my Elzetta lights have scratches and small chips (from altercations with concrete), but both still function like new. I’m confident both will outlast me.