I’ve used a pair of Rudy Project Rydon Stealth glasses as sun and safety glasses for about five years now. They’re a great eye protection system for active wear, and I think are especially attractive for those who require prescription eyewear. The Rydon offers an adaptable system with interchangeable lenses and full coverage, in a lower profile compared to popular tactical eyewear systems like the Revision Sawfly, Oakley M Frame or ESS ICE. 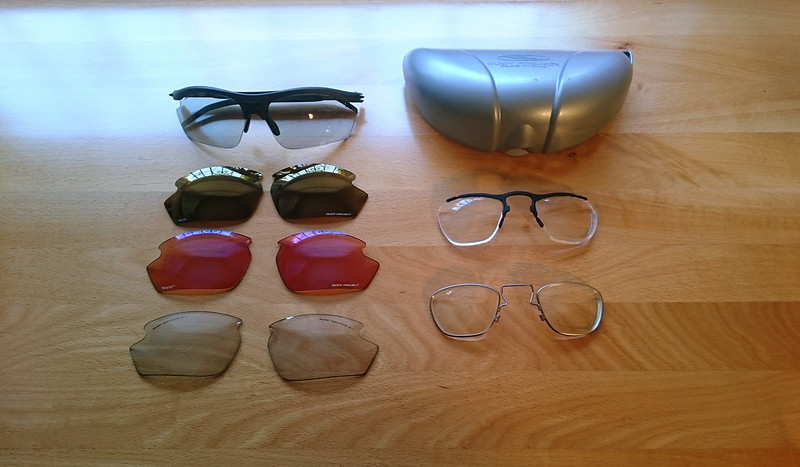 The temples and nosepads of the Rydon are made from an pliable rubber material that lets the user adjust them however they want. You can have straight temples or hook them down behind your ears. You can move the nosepads to get the right height and clearance on your face. I find that both adjustments largely stay in place after being set. If they do move, it is simple to reset them.

The only difference between Rudy’s “Stealth” and non-“Stealth” line is the ANSI Z87.1 rating applied to the frame. Z87.1 is the standard for eyewear protection that will be familiar to anyone who has worn safety glasses or so-called “tactical” eyewear. It describes, among other things, impact resistance. The Rydon lenses are interchangeable between Stealth and non-Stealth variants, and certain lens selections have their own Z87.1 ratings. The Stealth frames are made from a different material than non-Stealth. The non-Stealth Rydons fail to meet Z87.1 standards due to how they shatter1.

Unfortunately, Rudy has not certified the Rydon for MIL-PRF-32432, the military specification for ballistic eyewear.

As you might expect, the Rydon have proven to be very durable. I’ve used them regularly over the past five years. I shoot in them, I crash bikes in them, and I’ve been punched in the face more times than I can count in them. They’re none the worse for wear. Certain lenses have minor scratches, but none that I notice when I’m actually wearing them. The frames themselves are like new. The rubber material does not absorb sweat and odors, which is a complaint I’ve heard of Oakley’s “unobtainium” rubber temples.

Rudy is well known for their ImpactX lenses. They describe it as being a “bullet-proof, transparent, and light-weight material capable of providing superior protection, reliability and longer lasting performance than polycarbonate”. It is what Apache windshield panels are made out of, which makes me feel good about myself2.

ImpactX is actually just Rudy-branded NXT. NXT is a variant of Trivex. I’m not sure what the difference is between NXT and Trivex. It may be that NXT is just a specific branding of Trivex. I do know that the Z87.1 impact protection that NXT/ImpactX claims is a property of the Trivex. Trivex gives equal protection.

Trivex is slightly more expensive (polycarbonate costs ~$40, Trivex ~$50). Trivex also has a slightly lower refractive index, which translates to Trivex prescription lenses being slightly thicker than polycarbonate. But Trivex has a lower specific gravity, so the Trivex lenses will be slightly lighter than the equivalent polycarbonate, despite the added thickness.

There’s nothing rare or special about Trivex. Everyone does it. You can bring any set of frames into any optometry office and tell them you want to put Trivex lenses in it. As long as your prescription fits the frame, they can do it. The resulting lenses will meet or exceed Z87.1, even though your optometrist likely isn’t going to get them certified for the Z87.1 stamp.

The ImpactX lenses, in addition to offering impact protection, are also photochromic. Photochromic lenses darken when exposed to ultraviolet radiation. Having a clear lens in a pair of safety glasses is critical for indoor work, and being able to use the same lenses as sunglasses outdoors keeps the overall price down. It is also helpful for transitions. If you start out in the sun and then go inside, or the clouds roll in or the sun sets, your optics quickly respond without you needing to take time to remove the glasses or swap lenses.

While the ImpactX lenses are the only offerings from Rudy with the Z87.1 stamp, the company does offer some other lens options.

Rudy’s Polar 3FX is their polarized lens solution. Polarized lenses reduce glare, which is useful on water and snow. I have a pair of Polar 3FX brown lenses. At 15% light transmission, these offer about the same protection as my old Julbo Micropore glacier glasses. They’re a great supplement to the ImpactX photochromic lenses, and are light enough that I am happy to carry them as a secondary option on backpacking trips for use above the tree line.

The third lens I went with is what Rudy calls Racing Red. These are a high contrast red lens with 28% light transmission. A contrast lens in something like red or yellow is a great option for hazy days when it isn’t bright out and you don’t want much light reduction, but you find yourself squinting from the glare4.

Of the three lenses (or four, since I now have two of the photochromic clear-to-black lenses), I use the Racing Red least of all. They’re great in certain conditions, but the ImpactX(-2) lenses work well in all conditions, so I find that I can just leave them in the frame all the time and never think about it. Plus, Z87.1.

When I first purchased the Rydon system I went with the full metal frame. It has served well over the years. Like the Rydon frame, it still functions like new. Occasionally a punch in the face will cause the insert to be knocked out of the Rydon, but that hasn’t caused any damage to the carrier, and it only takes a second to pop it back in.

This past spring, when I bought the new ImpactX-2 lenses, I also wanted to purchase another carrier to have my new prescription put in it. This time around I tried the “rimless” model. The “rimless” carrier is not actually rimless: the lenses are held in place by a thin wire that goes around the circumference of each lens. This can result in a thicker lens. With a rimless carrier, the lens need a groove cut into it to accept the wire. Prescription lenses are thinnest on the inside (near the nose) and thickest on the outside. If your prescription is weak enough that the outside of the lens is not already thick enough for the groove to be cut, the thickness will need to be increased.

I’ve not found that the lenses in my rimless carrier appear any thicker than the ones in my old carrier, but that’s something that you may want to keep in mind when deciding between the two carrier options.

When you’ve received the carrier, you can take it to any optometrist to have your prescription lenses filled. Finding an optometrist who has some experience with this kind of setup – whether they are actually a Rudy dealer or offer some other sport brand with an insert system – will like behoove you. With my first pair, I used a Rudy dealer. The optometrist that I used when filling the new carriers this year was not a Rudy dealer, nor had they ever dealt with something like this before. However, they actually grind their lenses in house, which is something I’ve never seen before. When placing the order I was able to talk with the lab manager who would actually be making the lenses, which gave me confidence that I wouldn’t be wasting my money5.

This time around I went with an anti-fog coating, which I did not have previously. While it was rarely ever an issue, I did occasionally experience fogging with the old lenses. It usually happens when walking into a sweaty gym when it is cold and dry outside. It’s not really the time of year for me to be able to evaluate if the anti-fog coating is doing anything on the new lenses.

I think an anti-glare coating on the prescription lens is unnecessary. The tinted Rydon lenses should take care of that problem whenever necessary.

I did also go with an edge polish on the new prescription lenses. Previously I opted to forgo that option with the old metal carriers, but with the rimless carrier I thought that it would help maintain a lower profile look – both from the outside looking in and the inside looking out. I think it was a smart decision.