In 1891, Thomas Gaskell Allen and William Lewis Sachtleben set out from St. Louis, Missouri to ride their bicycles around the world. Across Asia on a Bicycle is the account of the Asian leg of their 15,044 mile journey – from Constantinople to Peking. It is an excellent read and, along with Journey to the Centre of the Earth, sits as my favorite cycling book. 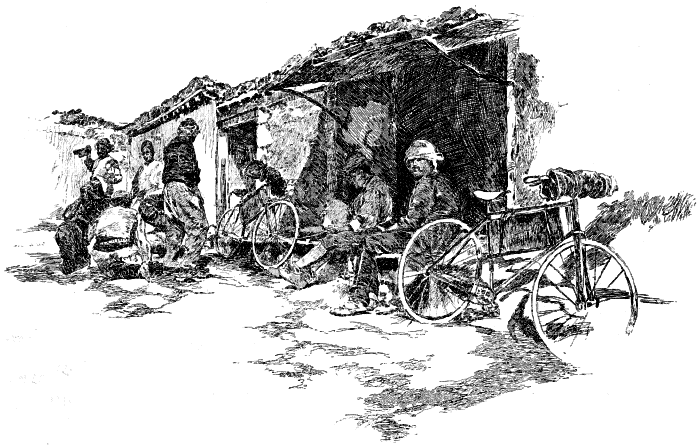 Despite their journey having taken place over 100 years ago, when the safety bicycle was little more than a decade old, their luggage is recognizable as a modern bikepacking setup: a framebag, small seatpost bag, and a bedroll strapped to the handlebars. In preparation for their ride through the Gobi into China, they stripped their load down further.

Our work of preparation was principally a process of elimination. We now had to prepare for a forced march in case of necessity. Handle-bars and seat-posts were shortened to save weight, and even the leather baggage-carriers, fitting in the frames of the machines, which we wourselves had patented before leaving England, were replaced by a couple of sleeping-bags made for us out of woolen shawls and Chinese oiled-canvas. The cutting off of buttons and extra parts of our clothing, as well as the shaving of our heads and faces, was also included by our friends in the list of curtailments. For the same reason one of our cameras, which we always carried on our backs, and refilled at night under the bedclothes, we sold to a Chinese photographer at Suidun, to make room for an extra provision-bag.

This book was another recommendation by Joe Cruz, who also has some photos of Allen and Sachtleben on his blog.