Late Saturday morning I loaded up my bike and took off for the mountains. The plan was to head out to Granite Falls, pick up the Mountain Loop Highway, and spend the night somewhere around Barlow Pass. The following day I would continue along the highway to Darrington and head back to Everett to complete the loop.

The way out of town is an unremarkable ride along the shoulders of two state highways. It doesn’t take long to reach Granite Falls, where the Mountain Loop Highway begins. 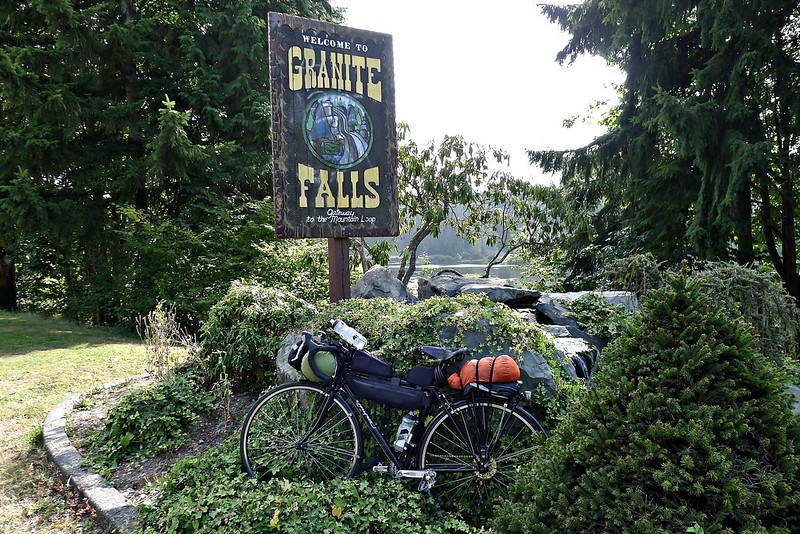 I’ve driven the highway into the mountains countless of times – many of my favorite trailheads are located off of it – but this was the first time I had pedalled it. The highway itself doesn’t get too high. The highest point is probably a little under 3,000 feet, but I was starting from sea-level, so there were a few hills to climb. I shifted down to my granny gear and prepared to spin my way up, past the quarries and mines and the masonic park that always gives me a slight feeling of discomfort. The National Forest begins near the top. 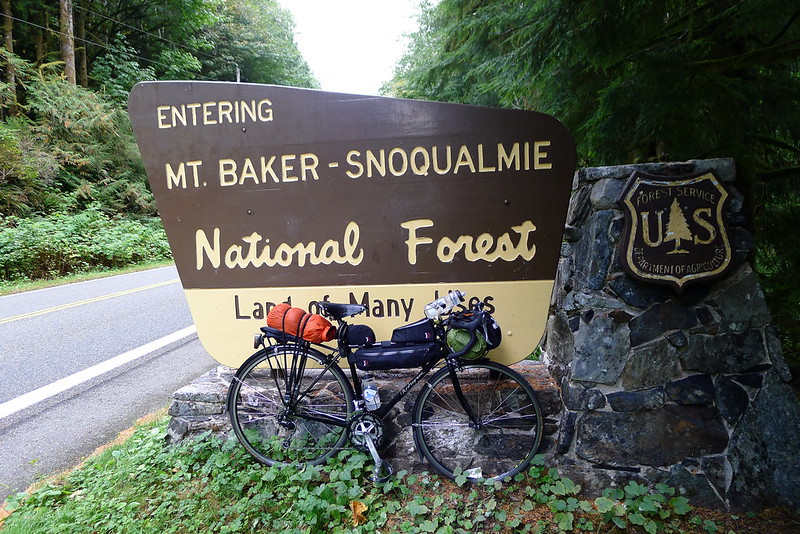 After entering the forest the highway follows along next to the south fork of the Sauk, which makes for a pleasant, flat-ish ride, with very little motorized traffic to interfere. Most of the established camp grounds are closed this time of year – “closed” being National Forest Service code for empty and free. 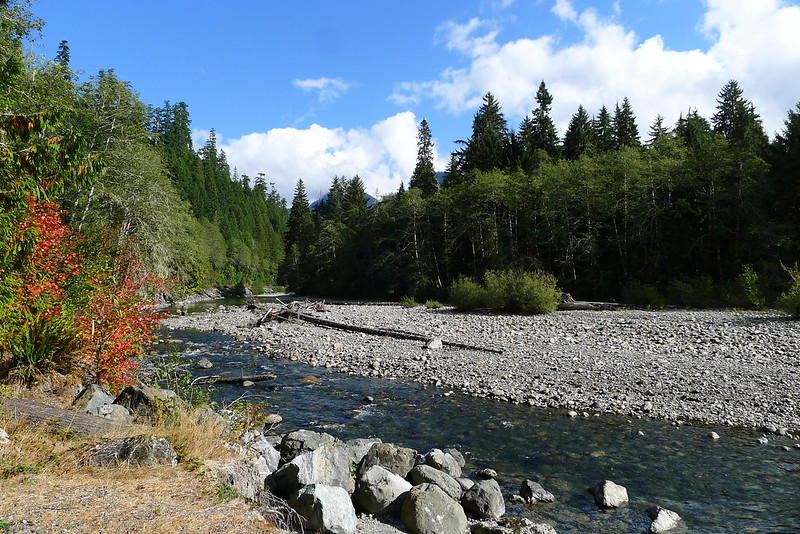 I had initially intended to spend the night somewhere along this stretch, but it was only mid-afternoon. I decided to head a bit further and camp around Barlow Pass. The pavement ends at the pass and the highway loops down and out of the mountains along a narrow gravel road. When I reached the pass the Sheriff was there, sorting through his ring of hundreds of keys, attempting to locate the one to unlock the gate at the start of the road to Monte Cristo. Apparently a young boy was hiking out there with his family and cut himself on a piece of old mining equipment. The search and rescue team were on their way up but would need to get through the gate. It must have been some cut to warrant the response. 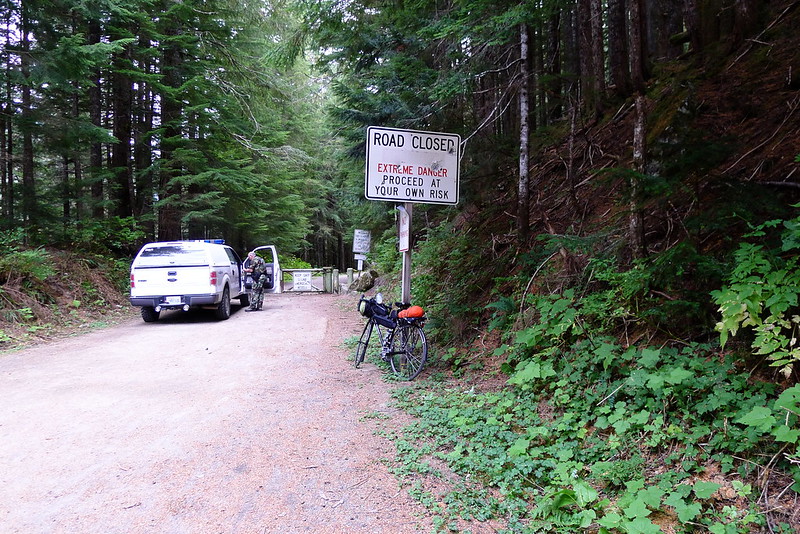 There was plenty of light left at the pass. I amended my plan once more and took off down the unpaved section of road, deciding to camp somewhere in the woods below. The road is in pretty decent condition, by Forest Service standards. There aren’t too many potholes and the gravel isn’t layed on too thick. It makes for a bumpy ride, but my skinny 700x25 tires handled it fine. I pulled over for a quick dinner at 6PM and then got back on the road, intending to ride till 7PM. That would give me about 30 minutes to make camp before it got dark. 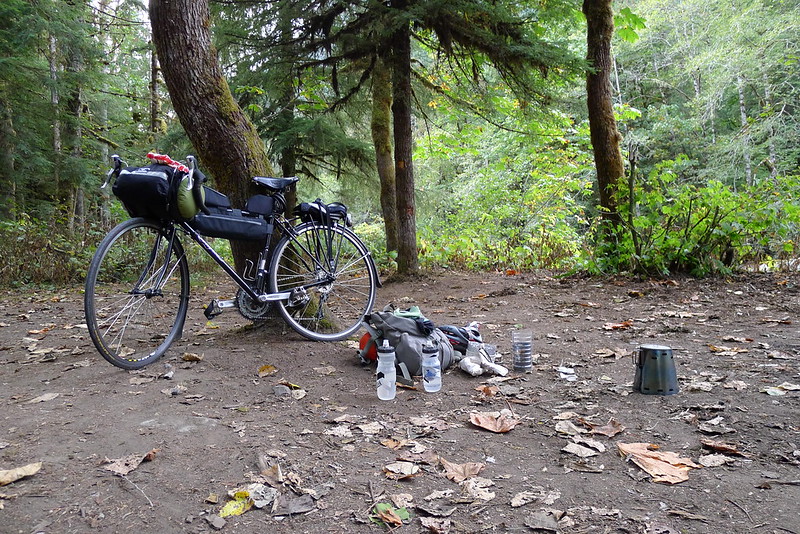 At 7PM I found myself near a picnic area with a short trail that led into the woods to a small clearing with a table and enough room for a tarp. I pitched camp there and went to bed not long after.

The morning was chill. I rose with the sun. After fueling up with oatmeal I shook the frost off my tarp and packed everything back on the bike. I only had a couple bumpy miles to pedal before reaching the pavement again. 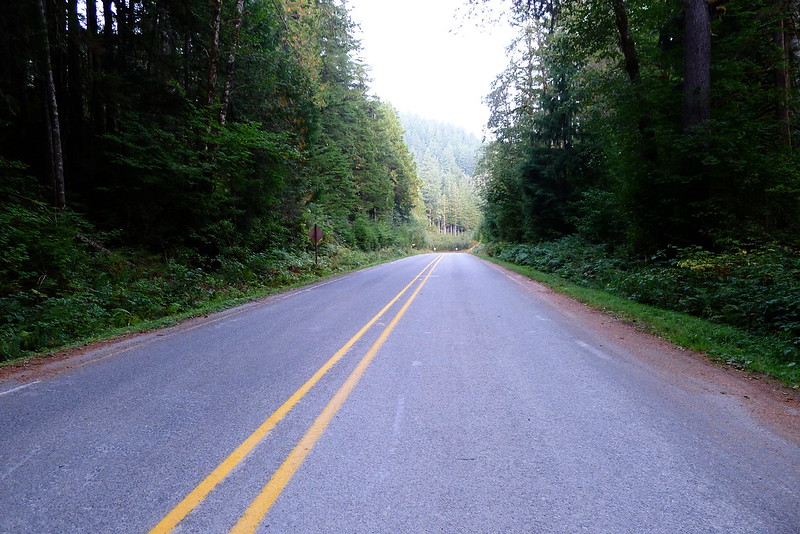 I was perhaps too optimistic when I packed only fingerless gloves. The cold air caused a sharp pain in my fingertips. I stoked the furnace a bit by breaking off a few hunks from a bar of dark chocolate that I kept readily accessible in my frame bag. Either the chocolate or the rising sun worked. 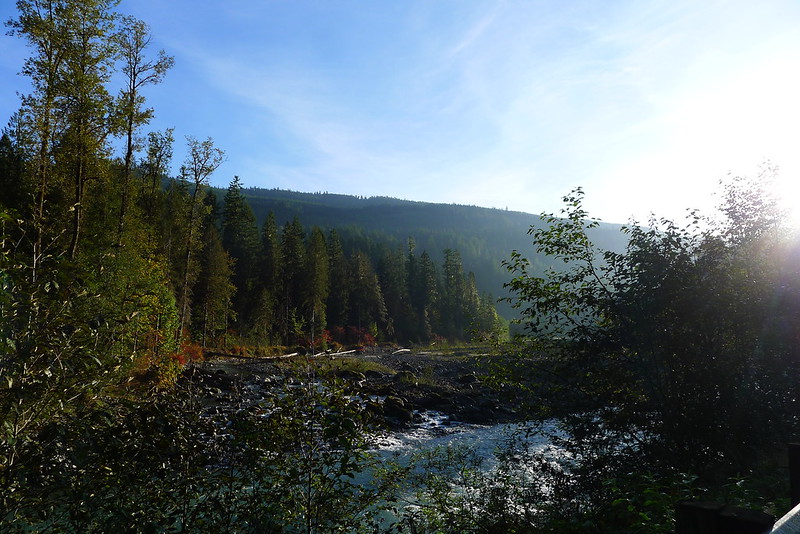 At Darrington I reached the end of the Mountain Loop Highway. The next leg of the trip would be along SR 530. It was the stretch I was looking forward to most. I had never ridden it before, but each time I drove along it the road struck me as a wonderful stretch of pavement to pedal. It travels through the foothills of the Cascades, along pastoral scenes set against mountain backdrops. Horses and cows outnumber motorized traffic. 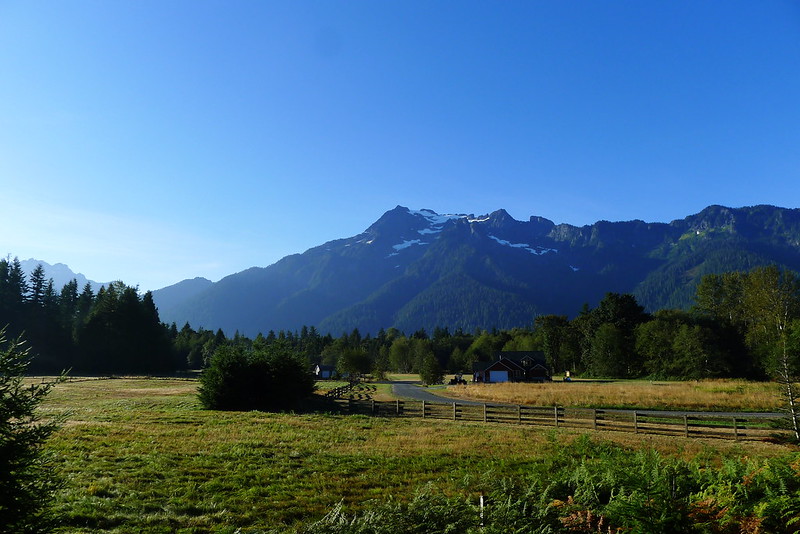 The road lived up to my expectations. I cruised along the meandering highway until reaching Arlington in the late morning. There I stopped at the Shire Cafe (in the same building as the Mirkwood game store, Mordor tattoo, and Rivendell hair salon) for a breakfast burrito – enough fuel for 53 miles. A block away I picked up the Centennial Trail. 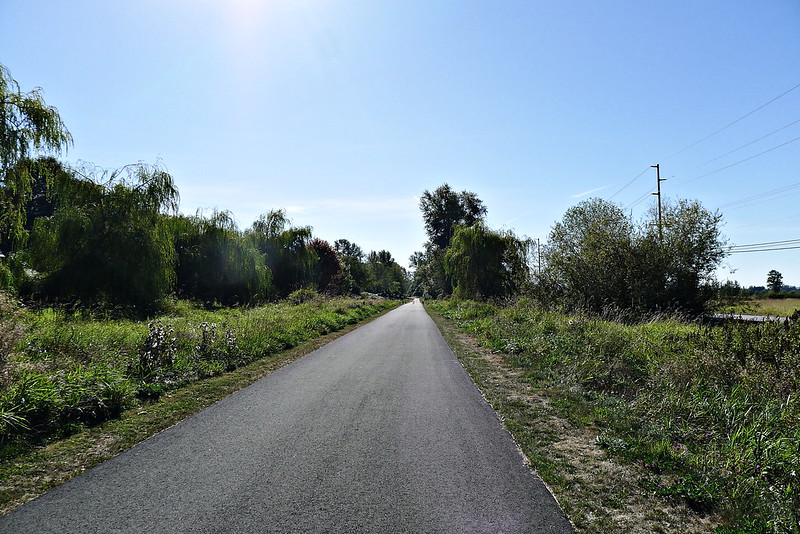 I pedalled down the trail, though the woods of the county, before cutting west out to Marysville, from where I went over the sloughs and the Snohomish river to complete my loop back in Everett. In town I detoured to the waterfront farmer’s market to conclude the trip with an apple and baguette of victory. 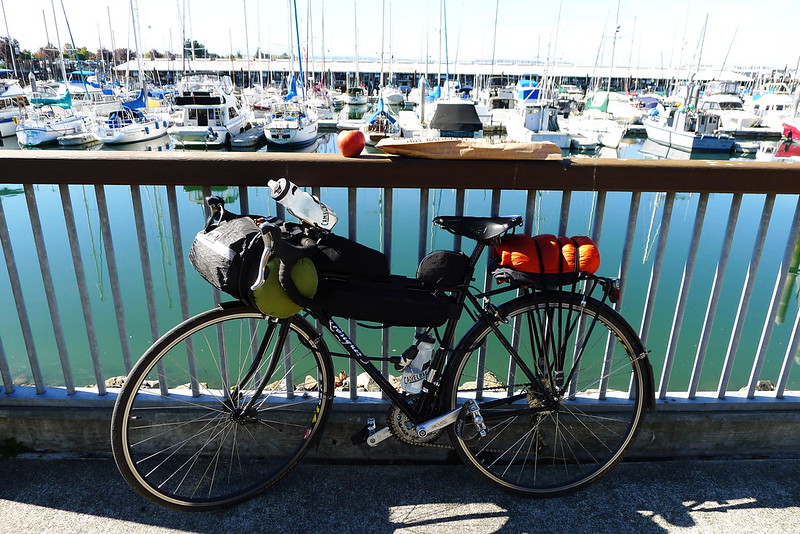 This is the best ride I’ve yet to do all within Snohomish County. The route looked roughly like this. I think that my mileage was closer to 130 miles. The trip could probably be done in a full day, but I enjoyed it as a leisurely overnight trip. It took me 26 hours, door to door.