Back in 2017 one of the ladies at Red Blossom Tea chastised me for not using a tea scale. I went home and ordered an American Weigh Scales SC-2kg, which measures up to 2kg with 0.1g resolution. It seemed adequate for the task, and compact enough that I wouldn’t mind it taking up a little room in a drawer if I ended up not using it frequently.

At the start of 2020 I decided to become an adult and begin to measure all solid kitchen ingredients by weight instead of volume, so the SC-2kg began to see much more frequent use.

That went along swimmingly for about a year, until the beginning of 2021 when I became curious about the accuracy of the scale. Nothing in particular prompted this curiosity. I just enjoy knowing that the tools in my life are both precise and accurate. As helpfully explained by LabBalances, there are a number of different scale calibration systems in the world. All of it is overkill for use in my personal kitchen, but I decided to look into the OIML-M1 class from the International Organization of Legal Metrology.

When I received the weights I found that the SC-2kg reported the correct measurement for all 4 calibration weights. I also tried the calibration weights on my MyWeigh UltraShip Ultra-35, which is the scale I’ve had kicking around since 2009 for measuring backpacking gear. It only claims to have 2g resolution up to 1kg, and 5g resolution up to 16 kilograms. I found it to be accurate within its claimed resolution. 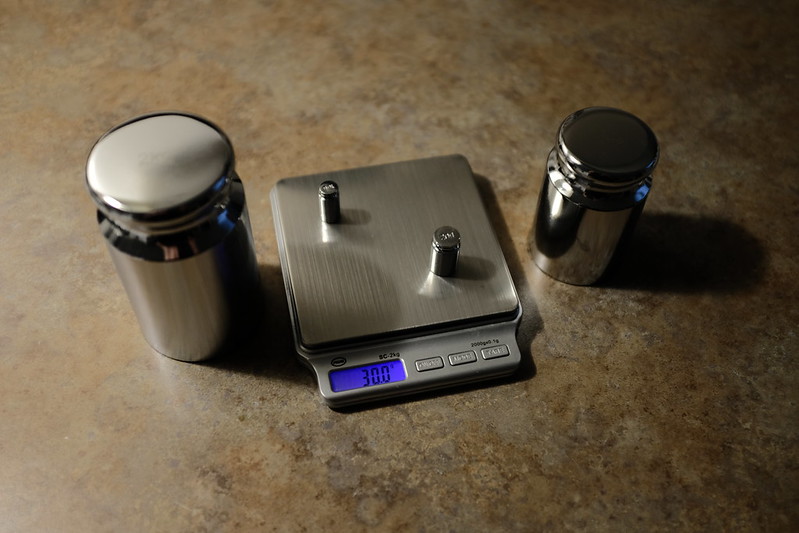 So all of this was for naught. Both of my scales were already accurate and not in need of calibration. But I really enjoy having these OIML calibration weights and knowing that my measurements conform to the standards of the universe.