I replaced the LCD panel in my Thinkpad X260 last month. The original panel had developed some scuffs from its years of service. They were never noticeable inside, but became mildly annoying when using the machine outdoors in direct sunlight. Since I’ve been working outdoors more often over the past year, I decided a replacement would be a worthwhile idea. The internet makes it look easy, as long as one purchases the right panel.

I was told that the X260 originally shipped with three different LCD panels, so my first stop was Lenovo’s parts lookup tool where I input my serial number and received in exchange a complete parts list. This told me that my original panel was an AUO B125HAN02.2 (FRU 00HN883).

A seller on eBay claimed to sell this exact model for $80. I placed an order, waited a couple weeks for shipping from Shenzhen, and opened the package to discover an IVO M125NWF4 R0. This wasn’t a complete surprise. I had heard that sellers often ship compatible products, rather than the exact product they sold. The panel looked almost identical, so I decided to try it. 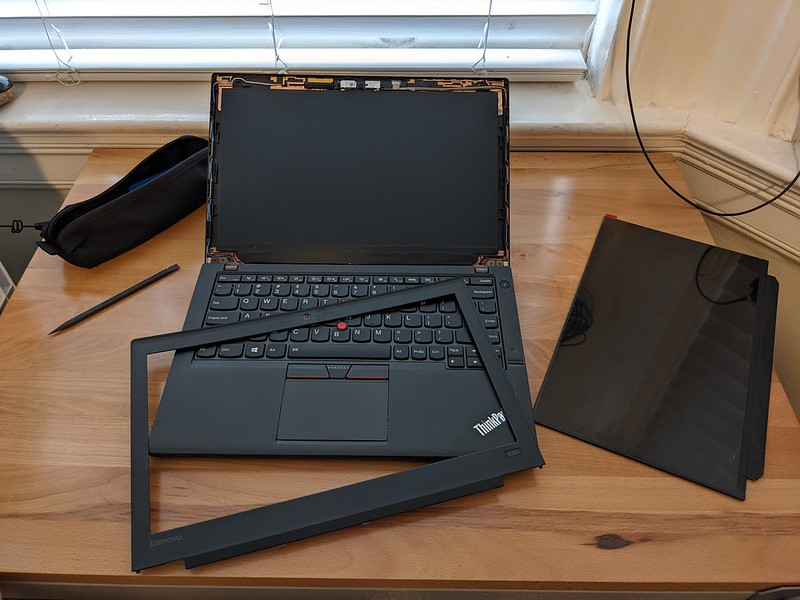 Replacing the panel took about five minutes. The new panel does appear to function identically to the original – resolution, brightness, and colors all look the same to me. The only difference I can discern is that the new IVO panel looks a little less matte than the original AUO panel. (In the photo, the new panel is the one sitting to the side of the laptop. It still has the protective covering on it – evidenced by the red pull tab – which makes it look like it has Apple-level glossiness. I can happily report that the actual panel surface looks nothing like that.) If I shine a direct light on both panels, the edge of the light is a bit more diffuse on the AUO panel. I’ve noticed no practical difference due to this indoors. I’ve worked with the new panel outside a couple times now, and so far it seems to work great in that environment as well. And since it has no marks, it is definitely a net improvement over the current state of the original panel when outdoors. 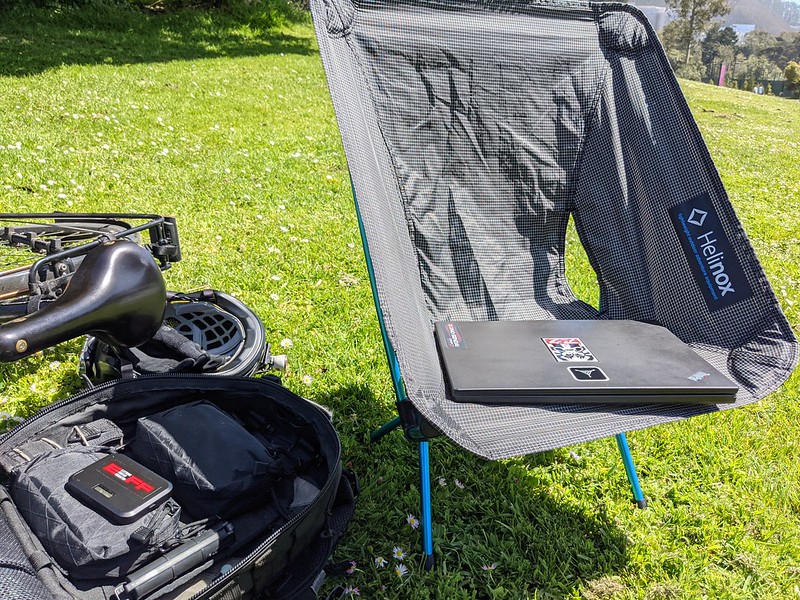 According to Lenovo’s parts lookup tool, my backup X270 uses the exact same AUO panel as what was originally in the X260. So I now have 2 new LCD panels that are swappable between the two computers. This sort of redundancy makes me feel warm and fuzzy. I’ve also placed the old panel into storage as another backup. It remains perfectly usable outside of direct sunlight.

I first noticed the marks appearing on the old panel a couple years into its service life. It was clear these were caused by the LCD contacting the keyboard when the laptop was closed – more specifically, I assume that the problem is whatever grease or oil gets transferred to the keyboard from my fingers. To solve this I started covering the keyboard with a microfiber cloth before closing the laptop. Since I started doing this a few years ago, I have noticed no new marks appear on the panel. Now that I have a new panel, my expectation is that this technique will keep it in good condition for years to come.

There seems to be no shortage of sellers offering microfiber “keyboard covers”. I assume they’re mostly all interchangeable. The one I went with was Clean Screen Wizard for 12” Laptops. The actual dimensions of these cloths are about 10.5” by 6.75”. This is not large enough to cover the entire base of the laptop, but it is large enough to cover just the keyboard, which is all I wanted to accomplish. I was worried that if I bought a cloth large enough to cover the whole base (as they show the cloths doing in their product photos), I’d have to worry about lining the edges up just so before closing the laptop. The cloth intended for 12” laptops gives me enough wiggle room that I can just throw it on blindly.

I’ve since bought half a dozen of these same cloths and use them everywhere one uses microfiber cloths. The larger size, compared to typical eyeglass microfiber cloths, is convenient for cleaning optical and camera lenses.