Five years ago I purchased the PragmaBed Simple Adjust Head & Foot bed frame. It has proved to be an excellent purchase. I can’t think of any way to improve it.

When I went to college, I spent the first year in the dorms. The bed frames provided by the university were Twin XL, so I showed up with a Twin XL mattress and bed sheets. In the subsequent years, I’ve replaced that mattress and all the sheets. But never all at once, which means I’ve just continued to buy Twin XL sized things. That was still the case when I bought the PragmaBed frame. I would be just as happy with a Twin sized bed. I’ve never been convinced of a need for something wider, but one of the things that attracted me to the PragmaBed was that, if my mind was ever changed, I could simply buy a second frame and attach it to my existing one with the attachment brackets offered by PragmaBed. Instant wide bed frame.

The legs of the PragmaBed collapse and the body folds in half, making the frame easily movable by a single individual. This is a thing I value, despite moving my bed infrequently. The frame is made of steel, with a powder coating that is reminiscent of a truck bed lining. It is a durable package that I expect to last for many years to come.

The head of the bed has a ratcheting mechanism that allows it to be raised, like a hospitable bed. This is great for lounging – I’ve never felt that the functionality offered by a couch justified the real estate required by a couch, but now my bed is a couch – or when injured. The foot of the bed can also be raised, though not as high as the head. I’ve never actually raised the foot. I imagine it is useful if you’re trying to reduce swelling in your lower legs or feet. 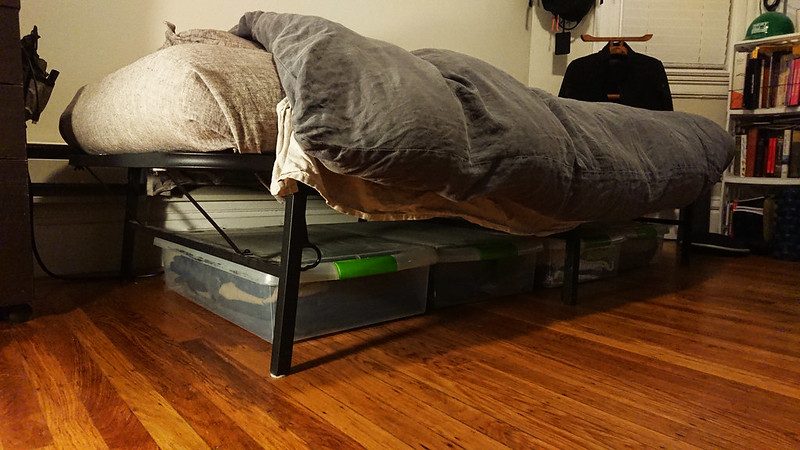 The legs raise the platform 13” off the ground. I keep four 40-quart Iris Store and Slide boxes underneath it. One holds my spare pillow and linens, one holds spare towels, one holds all of my pants, and the last holds specialized out-of-season items and a few miscellaneous items like hats.

I’ve used these same containers for eight years now. They fulfill their purpose admirably, and are the right size for my use. I’m not tempted to buy another spare set of sheets, because my spare sheets box is full. If I want to buy a new pair of pants, I first have to get rid of a pair of pants so that I have room in my pants box.