I have a pretty thorough setup with my every day carry. Between the level 1 items on my body and the level 2 items in my pack, I have all the tools that I think I may need. This limits the need for a bug out bag in my environment. Were I packing a bag to support running away from a disaster, it would largely duplicate what I carry every day. The difference is in shelter. Specifically, clothing. 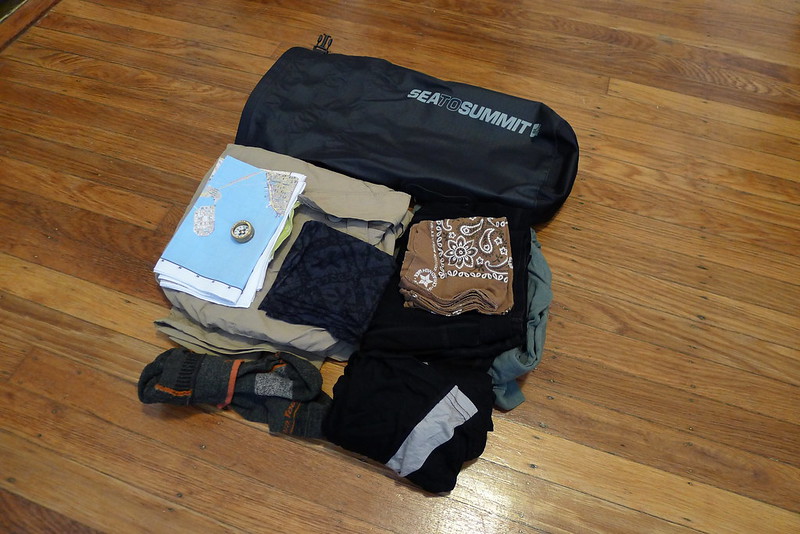 For the past few years, I’ve kept a bug out stuff sack instead of a bug out bag. The stuff sack contains clothes, which gives me what I need to leave in a hurry regardless of what I’m currently wearing. I keep a pair of merino wool boxer briefs, merino wool long underwear, a lightweight merino wool long sleeve shirt, quick-drying nylon pants, a Buff, merino wool and nylon blend socks, and a cotton bandana. The two non-clothing items in the stuff sack are a Tru-Nord compass and a silk escape map.

The map is from SplashMaps in the UK. It is a print of the OpenStreetMap for the San Francisco bay area at 1:40000 scale.

Conspicuously absent from the contents of the stuff sack is any sort of foul-weather gear. I don’t venture outside without a hardshell jacket in my pack, even here in drought-stricken California. I also generally will have some sort of insulating layer already in my pack, making that an uncessary addition to the stuff sack.

The stuff sack I went with is a Sea To Summit 8L Big River. This is a much heavier stuff sack than any of those I use backpacking. When I was deciding on the stuff sack for this project, I knew I wanted something that I would be comfortable running outside of a pack. The 420 denier nylon on the Big River is more abrasion resistant than any of my cuben or sil-nylon stuff sacks, and the Big River also includes Hypalon lash points on either side of the bag to assist when securing it. When I’m carrying a larger pack, like the FAST Pack EDC, these points are moot since I can just toss the stuff sack into the pack on the way out the door. However, if I’m using something smaller, like the FAST Pack Litespeed, the pack may already be close to full. With the Big River I’m able to quickly and easily lash the stuff sack to the bottom of the pack, without taking time rearranging the inside of the pack in an attempt to make more room. 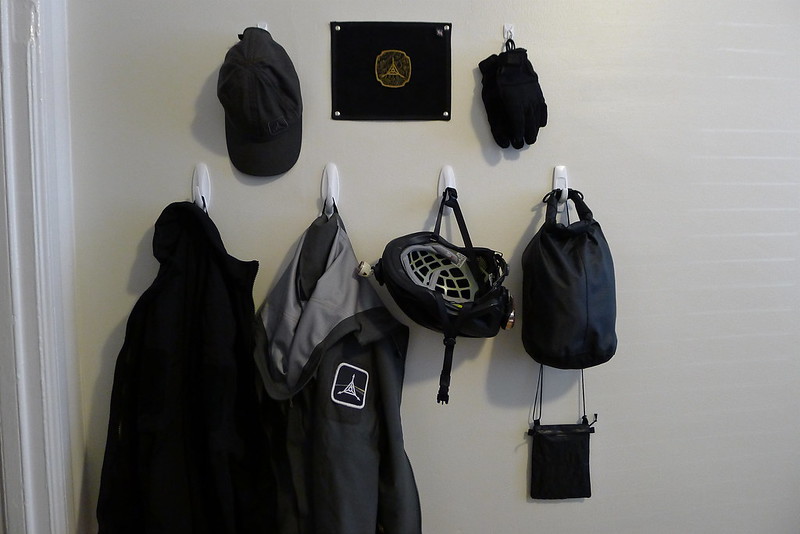 The stuff sack hangs on a hook on my wall, immediately next to the door. My pack and footwear stay underneath on the floor when I’m home. Keeping these items in the same spot means that I can grab them and be out the door in a short count of seconds. Also hanging in this area are my gloves and helmet, which are necessary when leaving on a bike (certainly the best bug out vehicle for a city). I also leave a hat, insulating jacket, and rain jacket hanging in this area. These items should already be in my pack, but leaving duplicates here allows me to easily grab them on my way out if needed. The last item in this area, hanging on the same hook as the stuff sack, is a small bag with documents that I may want when leaving in a hurry.

I keep a stuff sack at my desk at work with all the same things in it. Since I only have one of the silk maps from SplashMaps, the stuff sack at work instead has a few USGS quads of the area printed on glow in the dark onion skin paper. I buy these from zdw on eBay.