You are currently viewing all posts tagged with offworld.

In his video lecture on the subject he points out that the millions of tons of rock below your house are mostly just used to provide gravity, which can be achieved more efficiently by rotating a megastructure such as the previously mentioned O’Neill cylinder.

At some point someone ran the numbers on mass and came in at around 4-6000 megatons for the model 4 version, and if we assumed that was mostly dirt, steel, and water, that means that the number of cylinders with mass equal to our own planet would total over one quadrillion, or over a million billion, each having an internal area equal to bit over a millionth of Earth’s.

So if someone made a planet’s mass worth of those you would have a couple billion planets’ worth of living space. This happens to be about identical to the amount of sunlight the Sun cranks out relative to what hits Earth, a couple billion times more, and another notion that was gaining popularity at the same time was the Kardashev Scale and the Dyson Sphere or Swarm.

So if you found an Earth mass planet you could terraform it and now have a whole extra planet to live on, or your could turn it all into O’Neill Cylinders in a swarm around a star and have a billion extra planets’ worth of living area. And unlike terraforming a planet, which does require about as much work per bit of new living area as just building it from scratch, when you’re done you have a structure with identical conditions to that of Earth, since you can dial it’s gravity up to whatever you want, and light the thing on whatever schedule or temperature you want. You don’t have to mimic Earth’s conditions, but you have that option.

In 1975, scientists at NASA’s Ames Research Center in Mountain View, California, dreamt up ideas for habitats that could house human civilization in space. Rick Guidice was a freelance illustrator with a background in architecture when NASA tasked him with creating the artistic renderings.

While the diagrams Guidice referenced might have envisioned how humans could survive in outer space, his paintings depict a future where humans could thrive. Lush English gardens and glassy ponds fill the floating platforms of cylindrical space colonies. Spherical habitats are flanked by reflective surfaces that mimic sunlight. A cross-section of swirling structures reveal rich layers of agricultural farmland. This was NASA’s modernist fantasy of the future. 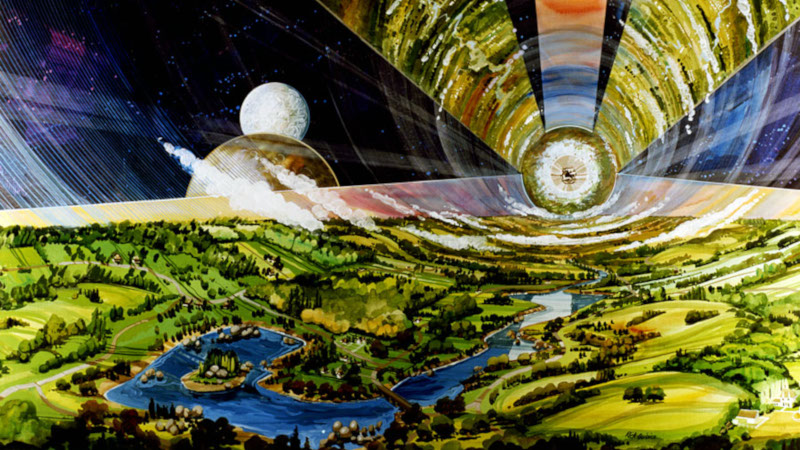 More on the settlement project.