You are currently viewing all posts tagged with morse.

Codegroup is a program written by John Walker that encodes and decodes any file into groups of five letters. For example, take an image, run it through codegroup, and this is what you get:

The resulting code groups lend themselves to being transmitted via low-tech, resilient means, such as continuous wave radio. The ability to do this with any file is a simple but amazingly powerful concept.

With codegroup, I end up with a series of ASCII characters. I wanted to be able to feed those characters into a program which would convert them to Morse. The program should display the dits and dahs, but more importantly: it should beep them out.

morse.py is a simple script which does just that. It accepts ASCII input and encodes it to International Morse Code. The Morse is printed to the screen, in case you want to key it out yourself. Johnathan Nightingale’s beep.c is used to play the beeps with the terminal bell. The length of dits, dahs, and the pauses in between are configurable, but the defaults conform to International Morse. The input can be a file, but if no file is specified the script simply reads from standard input, which allows it to be piped together with codegroup.

What is the application? Suppose your government has shut down your internet access. You want to send a map to an acquaintance. With these tools, you can encode the map with codegroup, pass the result to morse.py, hold your radio up to your speakers and key the mic. That’s it. Censorship bypassed.

On the receiving end, the Morse needs to be translated back to ASCII characters, which can then be decoded with codegroup. It’s a slow process, but resilient. To speed things up, the file being transmitted can be compressed before being passed to codegroup. (And if privacy is a concern, the file can also be encrypted, but that would be illegal unless you are doing so to protect life or property.)

Although it’s no longer required for the amateur radio Technician license, I have decided to learn Morse code. Despite it’s age, Morse remains one of the most effective ways to transmit information over long distances using minimal infrastructure and power. 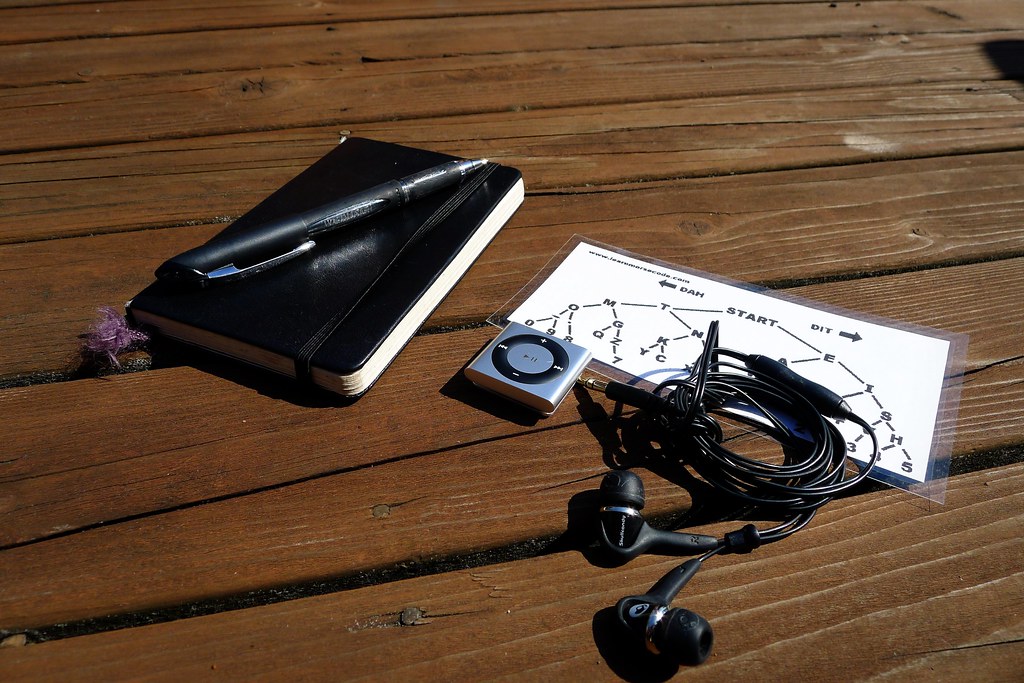 To begin, I have printed and laminated the code chart from learnmorsecode.com. This makes encoded and decoding Morse a simple (although not fast) task. I’ve also put a variety of audio files consisting of slow Morse transmission on my media player. With a notebook and pen, I can practice decoding the messages wherever I am.

I’m aiming for 10 minutes of practice per day.