I pedaled over to Japantown a couple months ago to restock rice and umeboshi. While there I visited ChaTo, a tea shop I had heard about but never been to. I had a craving for genmaicha, which I was sure they could satisfy (they did). But the real victory of the day was leaving with a bag of their Sumibi Houjicha. This is my new favorite tea.

I’ve previously mentioned my fondness for kukicha. Kuki means stem or twig, cha means tea, hoji means roasted, sumibi means charcoal fire. So kukicha is tea made of stems instead of leaves. It can be roasted or not. I like it roasted, which seems to be more common on this side of the Pacific Rim. Sumibi hojicha, then, is a charcoal roasted tea. It consists of 60% stems and 40% leaves, so it isn’t a pure kukicha. Instead it is a blend of kukicha and sencha. Most hojicha, I’m told, is made using bancha, which is harvested later in the season and considered a lower-grade leaf. Sencha is the premium early harvest stuff. The sumibi hojicha has a great smell and an amazing taste. The roasting gets rid of most of the caffeine. If you like kukicha, I bet you’ll like this stuff.

ChaTo also sent me away with a sample of their Houjicha Shizuoka, which is lighter in taste (but darker in color) and very sweet. I like it as a cold tea, but the sweetness of the tea tastes wrong to me when brewed hot. I recommend sticking to the sumibi. 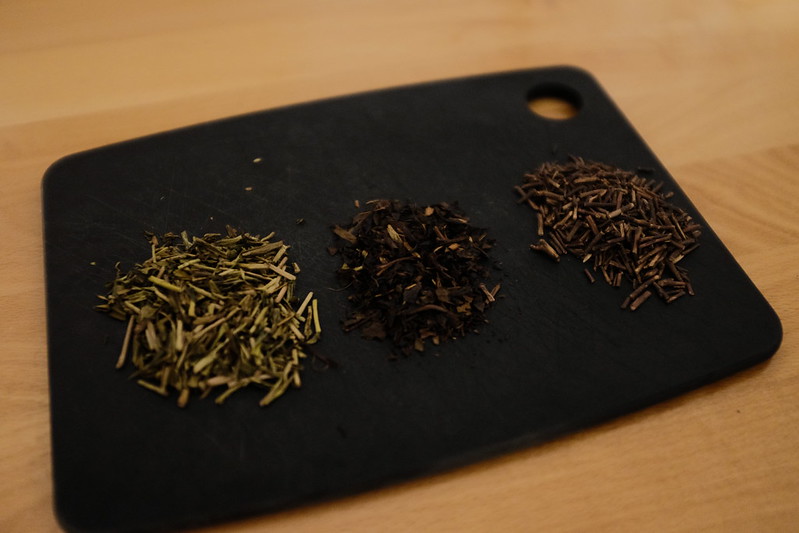