I’ve been shaving with the same Merkur Classic since I transitioned to wet-shaving a decade ago. This past January I treated myself to an upgrade in the form a Feather AS-D2.

Feather blades have a reputation for being the sharpest on the market. I would occasionally use them in my Merkur, but generally I stayed away. They were too sharp and would result in knicks or burn for the first few shaves, after which point they would have dulled enough to be comparable to other, more normal razor blades.

So I was not entirely sure what to expect with the AS-D2. As it turns out, Feather knows what they’re doing. The Feather razor blades and AS-D2 were clearly engineered to work together. I’ve seen it described as a mild shave, which is true in that Feather blades in the AS-D2 result in no knicks or burns, but is a somewhat misleading term, in that it also consistently provides me with the best, closest shave I’ve ever had, with little effort.

My technique with the AS-D2 is the same as it was with the Merkur. One pass with the grain, one pass across the grain, and a final pass against the grain. The only difference is the angle. Compared to the Merkur, I hold the AS-D2 handle at a more obtuse angle (placing the head and the blade at a more acute angle against my face). I generally kept the handle of the Merkur at about 30 degrees. The AS-D2 is held at (or slightly above) 45 degrees. 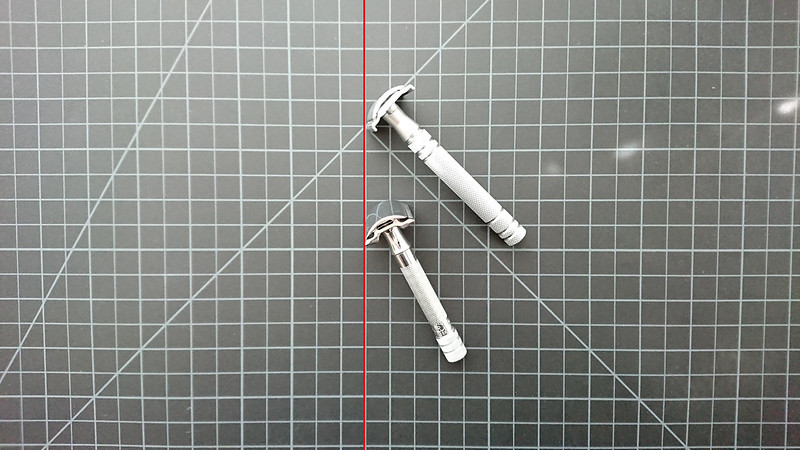 The AS-D2 wants sharp blades. I find that the first 2 shaves with a new blade are great, the 3rd is mediocre (what I would have described as a good shave with the Merkur), and the 4th is poor. I have been replacing the blade every 3 shaves, where with my old Merkur setup I would get 5 or so shaves out of a blade. I buy Feather blades in packs of 100, which works out to about $0.25 per blade, and I generally only shave twice a week. A quarter every 1.5 weeks is an acceptable shaving expense.

Between the Feather and the Merkur, my sample size is only two, but it’s hard to imagine a better safety razor.